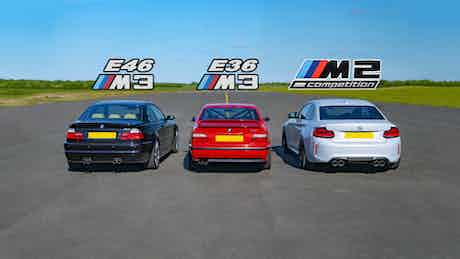 It’s a meet the ancestors drag race for BMW fanboys as the BMW M2 Competition takes on E36 and E46-generation BMW M3s.

It’s no secret that plenty of M aficionados consider the  E46 BMW M3 to be the best M car there has ever been. Launched in 2000, it’s powered by the legendary S54 engine – a 3.2-litre, naturally aspirated straight-six producing 343hp and 365Nm of torque.

Even better, it revs to 8000rpm and produces one of the most intoxicating noises that an engine has ever made. The one we have here is a 2005 model that’s been modified with a K&N air filter that actually cuts a few horsepower but produces an induction roar like a wounded lion.

Next up is the BMW M2 Competition. This is widely regarded as the best M car since the E46 M3. It’s near-as-dammit exactly the same size and weight as the E46 (which goes to show how much the 3-Series has grown in the last 20 years) but it’s a lot more powerful. Under its bonnet is a 3.0-litre straight-six engine boosted by two turbos, giving 410hp and 550Nm. It sounds pretty good, too, if not quite as good as the E46.

Then we have the E36 M3. Ours is an early 1994 3.0-litre model, which is widely regarded as one of the, err, least convincing, shall we say, M cars there has ever been. As standard, its straight-six engine produced 286hp but this one has been pepped up a bit to around 300hp and 320-ish Nm of torque. The interior has been stripped out, too, so it’s a useful chunk lighter than standard, tipping the scales at 1400kg, against the M2’s 1550kg and the E46’s 1570kg.

It’s also worth noting that is one of those of very rare drag races where every car has a manual gearbox.

So, will the new boy run away with it, or can the old guard give the whippersnapper a drubbing? And should Mat chop in his 911 for an E46? (Yes, he definitely should!)