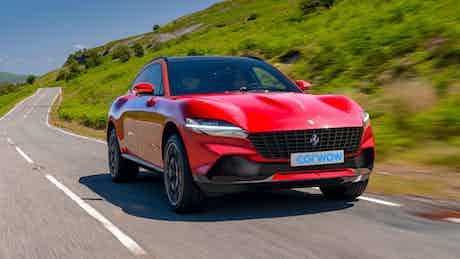 It looks as though Ferrari will finally jump on the SUV bandwagon with an all-new car, possibly called the Purosangue. These exclusive images imagine what this new alternative to the Lamborghini Urus, Bentley Bentayga and Aston Martin DBX could look like.

These exclusive renders of the Ferrari Purosangue give you a look at how the production car may turn out.

Upfront, you’ll spot thin headlights with daytime running lights cutting through in a similar fashion to those on the Ferrari Roma beside a tall trapezoidal grille.

The Ferrari Purosangue’s roofline will likely look sleeker than the comparatively boxy Bentley Bentayga, but without any angular edges like those on a Lamborghini Urus.

The rear of the car gets a large black panel with the prancing horse logo taking centre stage. The thin LED rear lights look similar to those on the Ferrari 296 GTB, and aren’t a million miles away from the full-width lightbar on a Porsche Cayenne Coupe.

In the front, you can expect the Purosangue to be crammed with leather, brushed metal and carbon-fibre, as well as a new version of Ferrari’s infotainment system.

The new Ferrari Purosangue is expected to be the first modern Ferrari to come with five seats, although it’s likely you’ll be able to get a set of two individual rear seats if you’d prefer – like those on the GTC4 Lusso.

Looking for a fast family car? Check out carwow’s pick of the best fast four-seat cars on sale now.

The new Purosangue is expected to come with a naturally aspirated 6.5-litre 800hp V12 engine lifted from the 812 Superfast. This would make it unique among other super-SUVs, most of which come with V8 engines.

Ferrari isn’t expected to offer a hybrid V12 Purosangue SUV, on the grounds that adding electric motors and batteries to a car with an already hefty V12 engine would make it too heavy. Instead, a twin-turbo V8 hybrid is likely to arrive at some point.

It’s not known whether the Purosangue will be rear-wheel drive (like most other Ferrari models) or whether it’ll use a similar four-wheel-drive system as the outgoing GTC4 Lusso.

Hybrid models may make use of a similar system to the SF90 supercar, where the V8 engine drives the rear wheels while electric motors power the front wheels.

Ferrari’s first SUV isn’t expected to make its public debut until later in 2022.

It’s possible that it could go on sale later this year, although (as with most Ferraris) you can bet that plenty of wealthy petrolheads have already posted blank cheques to the Ferrari factory to make sure their names are first on the list for this new SUV.

If you’d rather wait for this new car to appear in showrooms, get ready to hand over at least £200,000 to park one on your driveway.

Can’t wait to get your hands on a new sporty SUV? Check out the fastest SUVs on sale or get help choosing your ideal new car.