5 reasons we’re not zooming about in Flying Cars 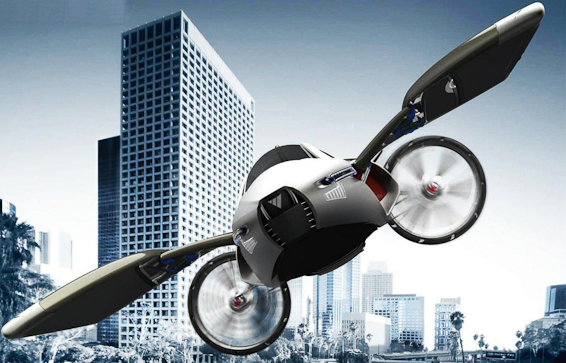 Does anyone else share my immense disappointment that its 2011 and flying cars are not mainstream? We were promised flying cars! With all the hype and optimism around the dawn of the new millennium and that anything is possible with technology mentality, shouldnt our cities at least be starting to emulate the space age surroundings from an episode of Futurama, with citizens zooming effortlessly through the skies?

According to the film industry, we should now be well on our way to flying cars being a reality for the masses. 1989s Back to the Future, set in 2015, shows flying cars and hoverboards as standard and Blade Runner depicts life in the year 2019 featuring proper VTOL (Vertical Take-Off and Landing) vehicles. Sadly though, we are without our own traffic dodging, flying machines. Cue the sobs.

The technologys all there apparently, its totally realistic, unlike the mere pipe dreams of teleportation or time travel. We cannot just keep widening our gridlocked roads and with an estimated additional 6 million cars on the road by 2031 in the UK alone, just envisage the traffic hell which will transpire! Why have we not yet solved this problem with air cars? Well, there more than a few reasons for the severe lack of flying cars, and these are just some of them…

Flying takes years to master, so picture the skies full of amateur pilots. At any time theres the threat of malfunctioning or badly operated cars plummeting out of the sky and crashing down on the people and houses below. Vehicles breaking apart in the sky (as has been the case with several flying car prototypes), collisions with birds, other airborne vehicles and buildings, as well as coping in severe weather conditions are all valid fears. Perhaps now youre starting to gauge some of the impracticalities.

We cant seem to follow basic road etiquette as it is, taking to the sky would be a whole different ball game. Bad drivers could come at you from all angles and running out of fuel in the sky does not only lead to your vehicle spluttering to a halt, it would drop from the clouds like an enormous hailstone. Then if you were to accidentally venture into a forbidden zone, theres the very real peril of being shot down to concede with.

2. Flying cars are a regulatory nightmare

The highways of the skies would require a massive amount of infrastructure and management. The multitude of cars, air space traffic and no-fly zones would need constant controlling and policing. Logistically, we couldnt have even a fragment of the cars on the roads flying through the skies.

If you havent noticed, there arent any signs in the sky, and the predicament of people getting lost whilst flying would be a pretty large concern. It wont exactly be as easy to pull over and ask someone where to go when youre at 6,000ft and going 200mph. Are we going to totally rely on technology; GPS is not exactly fail-safe, or will we have to get seriously familiar with navigating from the air with a traditional map?

4. It would be ridiculously noisy

Current flying car attempts have very loud engines and make a lot of noise during takeoff. Try to imagine the noise from hundreds, or even thousands of cars above you in the skies, amalgamated with the current noise from road cars and other aircraft… Maybe this isnt such a good idea any more!

The majority of attempts at designing flying cars are essentially blends of the characteristics of a car and a plane. What exactly is the point of a flying car if it needs a runway to take off and a pilot license to operate? This would only be useful for a handful of pilots. Worse, these hybrid machines neither drive, nor fly particularly well.

The editor of the website RoadableTimes.com explains it well Its like trying to mate a pig and an elephant… You dont get a very good elephant, or a very good pig. This is not the type of flying car weve all dreamed about, these engineers need to look to the Jetsons for inspiration.

Though the concept of personal flying vehicles is feasible, we wont experience one for a very long time still. There isnt enough interest in making it happen and until the risks are minimised and full automation of both operation of the car and traffic management can be instigated, theres just no chance! Aside from the roadable aircraft, the closest we may get to flying cars in the foreseeable future will be mainly for military or emergency and rescue use.

Unmanned aerial vehicles (UAVs) have been proved to be far, far safer than piloted ones, however they are not allowed to share airspace with piloted aerial vehicles. This is mainly due to an irrational fear of people not trusting unmanned vehicles, but also the issue of whos legally responsible if something goes wrong.

Our best hope in progressing towards having flying cars is to first support the case for automated vehicles to share the roads with humans, so back Google and their self-driving cars, which could then lead to getting UAVs to be permitted to fly in the skies. Automation would make roads safer and more efficient and could eventually lead to flying cars being possible!

For a laugh, check out this hilarious video from The Onion on flying cars:

Fuel duty and road tax: how to replace £35 billion a year of lost revenue
The 10 Best ‘Fast and the Furious’ Cars
Drag race: Ferrari F355 vs Kia EV6
Citroen e-C4 X revealed: price, specs and release date
Eyesight requirements for driving
10 of the best 60s cars
Road tax on electric cars: what you need to know
Drag race: Porsche 911 Turbo S vs McLaren 720S vs Lamborghini Aventador SVJ
VW Tiguan vs Skoda Karoq – which is best?
What does the engine management light mean?
Skoda Karoq vs Skoda Kodiaq – which is best?
8 of the best home EV chargers
Ford Titanium: what is it and is it worth it?
Ford EcoBlue engines explained
The best alternatives to the Ford Kuga