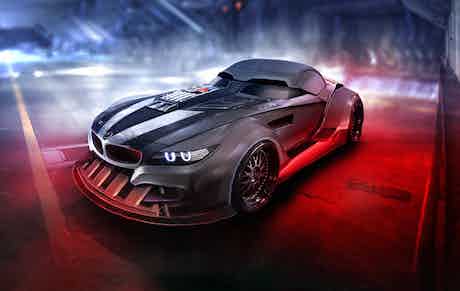 Picture the scene – it’s 2016, Star Wars: The Force Awakens was a smash hit at the box office, and the film’s characters past and present have a bit of cash burning holes in their space pockets. Naturally, they’ve come to Earth with one thing in mind – to source some new cars to take back to their galaxy and show off to their friends.

But what earthly cars would they choose? And what modifications would they make to add their own personal touches? And why didn’t we put Yoda in a Skoda? Read on to find out…

We have no idea how such a minor character from the first films saved enough money to buy and modify a Lamborghini Countach to look like a super-fast A-wing fighter, but we’re glad he did. Wedge’s Italian wedge also includes side-mounted blasters to get rid of anyone trying to enforce European emissions regulations. The Lamborghini’s comical rear spoiler has been modified into stabilisers to keep it planted when travelling at light speed.

Han always loved adding tonnes of power to a slightly rickety old ship that couldn’t really handle it, so it’s only natural he drives a Dodge Charger Hellcat. He’s given it a complete Millennium Falcon makeover, including a massive headlight that mimics his ship’s modified sublight engines. We can only imagine the modded Hellcat’s acceleration makes your eyes do that streaky warp-speed effect when you put your foot down, too – assuming a life-long friend hasn’t disabled it to avoid a hostile take-over.

Light, nimble and easy to get into – Luke Skywalker’s 2016 Mazda MX-5 is the exact opposite of the Death Star. It’s been designed to rekindle his boyhood memories of darting about Tatooine in his beloved X-34 Land Speeder. The body modifications are fairly minimal, but Luke’s strapped one of his old land speeder’s turbine engines to the back to give the MX-5 a useful torque boost for overtakes. Naturally, the headlights mimic his lightsaber’s colour.

Hopefully, the 2016 Alfa Romeo Giulia will really hit the mark, but the Empire’s legions of foot soldiers have created a version that’ll almost certainly miss 10 times out of 10. While the driver might need to stick to target practice, the car certainly hits the spot – just bear in mind the Giulia is deceptively tall, so is liable to smack its roof against barriers that don’t quite raise high enough…

We’ve been waiting for the new hybrid Honda NSX for as long as we have a new Star Wars film, but luckily our favourite double-ended lightsaberist has convinced Honda to make sure he gets one of the first cars off the production line. Complete with horned exterior and enough aerodynamic bolt-ons to completely destabilise any car stupid enough to give chase, Darth Maul’s NSX is a wicked work of sinister beauty.

If ever a Star Wars character was guilty of massive over-compensation, it’s good ol’ Darth Vader and his delightfully OTT approach to galactic domination. The theme continues with his car – a BMW Z4 with a built-in cow catcher that mimics his mouthpiece and a convertible armoured roof that lifts to reveal its fleshy innards. BMW badges have been replaced with the logo of his in-house ‘Death Star’ tuning firm.

Landing inexplicably out of the sky on a desert planet near you – it’s Boba Fett and his 6.0-litre V12 twin-turbo Mercedes G-Wagen. Naturally it’s been armour plated to keep up with the rigours of killing people for a living, and the loud side-exit exhaust is based on our favourite bounty hunter’s blaster.

The headlight armour looks just like Boba’s helmet design, just so you know you should definitely run away when it shows up out of nowhere. As a bounty hunting vehicle, it’s almost flawless – it’s only weakness being a propensity to fall to a disappointingly inconsequential death at the hands (or teeth) of a massive sand worm.

Ugly. Divisive. Pointless. That’s what it’ll say on Jar Jar’s gravestone when he finally pops his dribbly clogs, and they’re also some of the words used by journalists when the Nissan Juke SUV first appeared. We’re fans of the Juke’s alternative approach but, unfortunately, that makes it the perfect car for Jar Jar Binks. The bug-eye headlights and drooping tongue make sure Binks is never confused for anyone else when he turns up to his after-dinner engagements. Sorry Nissan.

And as for Yoda…

Apologies for not including Skoda in a Yoda – the small green Citigo was already perfect for everyone’s favourite Jedi master, but it just wouldn’t compete with Vader’s Z4.

This isn’t the first time we’ve mixed up the fictional worlds of film and real-world cars – if you liked this, take a look at our Mad Max school-run cars and our Jurassic World Mercedes GLE Coupe. And naturally, leave a comment below with the Star Wars cars that we missed!

Should you lease or buy your next car?
The best all-weather cars
Essential winter driving tips
What are winter tyres? Should I fit them?
10 best second-hand and used cars for under £5,000
carwow track battle leaderboard
What is horsepower? Plain English guide to HP, BHP, kW, PS and CV
How to negotiate a car price: 10 top tips
10 fastest diesel cars you can buy
Best cars for tall people 2021
10 best city cars (2021)
Drag race: Mercedes S-Class vs Mercedes EQS
Off-road challenge: Audi RS Q8 vs Dacia Duster
What to look for when buying a used car
carwow 1/4-mile (400m) drag-race leaderboard