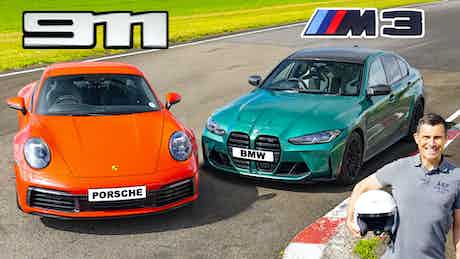 Can a four-door family saloon be quicker around a track than a Porsche 911? Let’s find out.

Obviously. We’re not talking about any four-door saloon. First up to the start line we have a BMW M3 Competition. Under the bonnet lies a 3.0-litre twin-turbocharged straight-six with 510hp and 650Nm of torque. This goes to the rear wheels via an eight-speed automatic gearbox and a limited-slip differential.

Taking on the M3, we have a Porsche 911 Carrera 2. It has a 3.0-litre twin-turbocharged flat-six engine slung out over the rear wheels putting out 385hp and 450Nm of torque. This powers the rear wheels via a dual-clutch transmission. It’s the lighter of the two cars, coming in at 1,505kg compared to the BMWs 1,750kg.

So which car will come out on top? You’ll have to watch the video to find out.