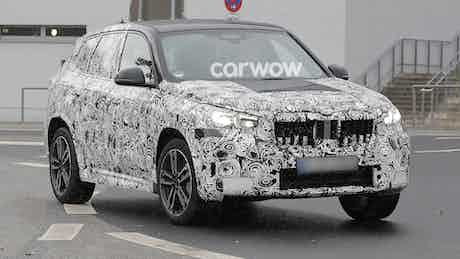 The new BMW X1 has been spotted testing before this new compact SUV goes on sale in 2022, with a hot M35i version on the way, too. Read on for everything you need to know so far.

A third generation of the BMW X1 looks to be on the horizon, with prototypes of the upcoming SUV spotted testing — with a hot 35i model on the cards too.

This alternative to the Audi Q2 and Mercedes GLA should launch in 2022 with a range of petrol and hybrid options, with the potential for a new iX1 electric car down the line.

Even though it’s disguised by heavy camouflage, you can clearly see the new BMW X1 is going for a much bolder look than before.

Poking through the front is a super-wide set of ‘kidney’ grilles — though not as tall as those on the latest BMW 4 Series — flanked by angular LED headlights.

You can spot a more obvious sloping roofline than on the outgoing BMW X1, along with a set of alloy wheels that look ready for production.

The taillights have been set higher than the outgoing car too, and look to take on a thin design similar to those seen on the BMW X4.

Joining the BMW X1 line-up for the first time will be the M35i. This high-performance take on the SUV will borrow the engine from the M135i hot hatch, meaning a 2.0-litre four-cylinder turbocharged engine producing 306hp and 450Nm of torque.

That’ll be sent to all four wheels, and could provide a 0-60mph time of around 5 seconds. Other changes will include chassis tweaks to make the X1 handle corners with more finesse, and some visual upgrades to help you tell it apart from the standard car.

These spy shots don’t give too much away, but you’ll spot a set of large exhaust exits at the rear of the car. The BMW X1 M35i should sport a more aggressive body kit too, along with plenty of M badging.

As the range-topping X1, it will come at a bit of a premium — starting around the £40,000 mark, squaring it nicely up against the Audi SQ2.

It’s expected that the BMW X1 will take on a pretty simplistic interior, with a lot of physical controls replaced with touchscreen icons within the infotainment system.

Design-wise, it should be pretty similar to the current 1 Series albeit with a raised seating position. BMW’s latest iDrive system will feature as well, along with a digital driver’s display in place of physical dials and gauges.

The new BMW X1 will be built using a revised version of the mechanical underpinnings that are also used in the new 1 Series and X2. As such, the engine options will likely be similar to what’s on offer for those cars. Petrol and diesel versions should make up the core of the range, with a few hybrid options, too.

The current X1 xDrive25e plug-in hybrid combines an electric motor with a petrol engine that produces 220 hp and has an electric driving range of up to 35 miles. These figures may improve for the new model.

An all-electric BMW iX1 is on the cards too, but this prototype isn’t it — and it’s unlikely to come alongside the launch of the new BMW X1.

Pricing for the all-new BMW X1 will probably start from £30,000 (in line with the price of the current car), though you can expect to pay a bit extra for the plugin hybrid and/or the option of all-wheel-drive. BMW hasn’t revealed the release date just yet but it could reach showrooms by 2022.

Compare the latest BMW X1 deals on the current car or check out the latest offers on the best small SUVs on sale now.