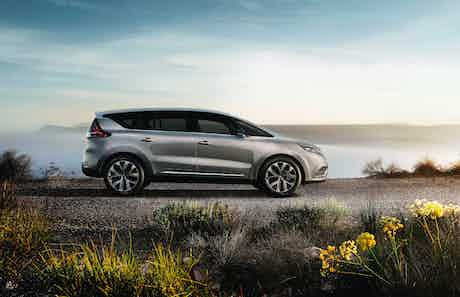 Surprise Paris debut for Renault’s latest big MPV – but it won’t be coming to the UK, which we think is a shame

Renault has somewhat unexpectedly taken the wraps off a brand new Espace, marking a return to a segment that they effectively invented when the first model hit showrooms in 1984.

From the three images released so far, it looks like Renault has made the Espace a very distinctively styled car, despite the practical brief it first and foremost must fill.

At the front, there is the familiar Renault grille treatment, complete with huge badge. The sides feature deeply sculpted doors and a sloping waistline which gives the car a sleeker profile, while some truly gigantic wheels try to balance the proportions of what is still a very large car. At the rear, the vertical tail lights look very reminiscent of the Scenic.

No interior pictures have been released yet, put Renault promises “a brightly-lit, comfortable and modular interior”, and interestingly, a “floating centre console”. The car will be available as both a five and seven seat version this time around, too.

No details regarding specification have been released, and Renault says it has no plans to release it in the UK, which – from these initial pictures – seems a shame. The Espace is due to be officially unveiled to the press and public at the Paris motor show on 2 October.