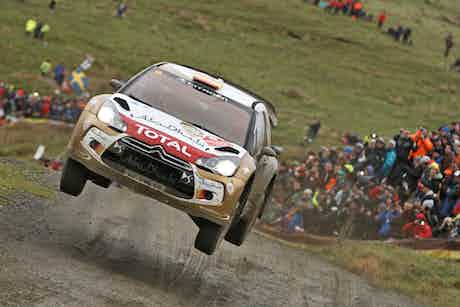 The world’s hardest rally quiz had fans of sliding in mud pulling their hair out – here are the answers!

Q: What car is this?

Q: Which nation has won the most WRC titles?

A: Finland, with 14 championship wins. France comes second with 12.

Q: How did Sebastien Loeb ruffle feathers in the 2013 Monte Carlo rally?

A: He turned up for practice in a Lamborghini Aventador – the cad.

Q: Which WRC champion has also won the Dakar Rally?

Q: What wasn’t dedicated to British rally superstar Richard Burns after he died of a brain tumour in 2005?

A: A stage of the Monte Carlo rally

Q: It’s the 1980s and a rally car is hammering towards you through a non-reflective void. What car do you need to dodge?

Q: At which rally would you find part of this road?

Q: Which state was WRC driver Chris Atkinson born in?

Q: Who lost the world championship title 300 meters from the finish of the season’s very last stage?

Q: Which Red Bull Global Rallycross driver was so convinced he had wings that he jumped out of a plane with no parachute?

A: Travis Pastrana – you can watch his antics here. You’ll need a head for heights…

Q: What happened to the Skoda Fabia IRC rally car during the 2012 IRC Rally of San Remo?

A: Landed on the roof of a house

Q: Which of the five cars shown has only won three WRC titles?

Think that was hard?