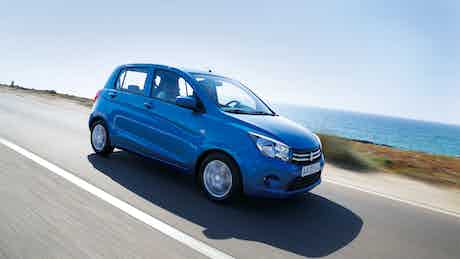 Suzuki’s newest city car is on its way to the UK in February 2015 – but is it enough to coax people away from the big-brand rivals?

It’s yet another small city car from small-city-car specialists Suzuki, this time called the Celerio.

Named after the Latin word for speed rather than a weird vegetable plural, the Celerio is due to eventually replace the Alto and Splash when it hits the market in February 2015.

By and large, not a great deal. While it’s an all-new car, at least for Europe, it’s a recipe we’ve seen before from Suzuki. Coming in at 3.6 metres long, but with a 2.4-metre-long wheelbase, it’s a small car with as roomy an interior as you can get without the help of a Time Lord – in fact Suzuki refers to it as an “A+” segment car, to hint at the extra space inside compared to its rivals.

The Celerio has been on sale in India under the Maruti Suzuki brand for the past 10 months equipped with a 1.0 litre, three-cylinder petrol engine good for 66hp, 66lb ft and 66mpg – spookily consistent numbers! This would appear to be the engine that will arrive with the European launch model, though from summer 2015 a new engine using what Suzuki terms “Dualjet technology” will post 85g/km emissions figures – about 77mpg.

An automatic option is a must for a car like this and Suzuki has found a novel way round the problem. Rather than screwing a notoriously heavy torque-converter auto to the tiny engine, they instead employ a computer controlled actuator to the manual gearbox resulting in no detriment to the emissions, economy and performance figures. How smooth it’ll be in city driving remains to be seen though.

Suzuki is betting the Celerio’s survival on a relatively high standard of kit. Even the entry-level model will sport six airbags, stability control, air conditioning, alloy wheels, DAB (digital) radio, CD tuner, USB and Bluetooth connectivity – though full specifications and the list of available optional extras are yet to arrive.

The 254 litre boot is pretty generous too, nudging towards the amount of space you see in the next class up.

Prices aren’t on the table yet, but with the Celerio promising to offer the room and kit from the Splash but at Alto prices, we’re expecting prices to start around £8,000.

Oh, just one or two. Take a deep breath…

There’s the new Toyota Aygo/Peugeot 108/Citroen C1, the excellent Volkswagen Group triplets of Citigo, Mii and up!, Hyundai’s i10, the Kia Picanto, Mitsubishi’s Mirage, the Ford Ka, the Nissan Micra, the new Renault Twingo and sister car ForFour from Smart – the list is oppressively huge. The Suzuki has its merits, but that’s a lot of showrooms for people to walk past.

Reworked Indian cars are rarely popular here – but the Celerio may be worth a look.