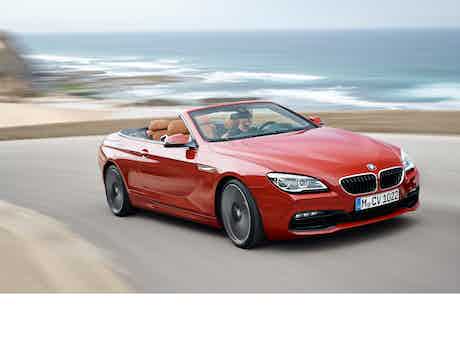 BMW certainly seems to enjoy playing a game of spot the difference with buyers. If images of the facelifted the 6 Series and M6 are anything to go by, they’ve stretched the definition of subtle to new extremes. Changes apply to coupe, convertible and gran coupe versions.

The styling changes will barely register to most, but BMW assures us they’re there. At the rear, changes amount to nothing more than a chrome strip on the bumper and slightly larger tailpipes. Along the flanks, new door mirrors have improved aerodynamic efficiency, and full-LED headlights now feature, above a minutely re-profiled bumper.

They thought they’d got away with it, but we noticed that the front grille now features nine bars where it previously had ten. Nice try BMW, but you couldn’t slip that past us. Much like a racing stripe on a 1998 1.0-litre Vauxhall Corsa, this change apparently “emphasises the power of the engines.”

Perhaps we’re being facetious, and maybe this alone explains the subtle increases in power across the range – but we doubt it. Aside from the M6’s unchanged (and still mighty) 560hp output, every other engine has increased by a couple of horsepower. Thanks to tweaks by the EfficientDynamics team, fuel economy has improved too. In the case of the 3.0-litre six-cylinder turbo diesel engine in the 640d, economy now stands at 54.3mpg – up from 52.3mpg – and carbon dioxide emissions have dropped to 146g/km. Power in the 640i and 650i turbo petrol engines now stand at 320 and 450hp respectively.

All petrol models now feature a sports exhaust system fitted with a valve which opens under heavy acceleration, adding what BMW claims to be “a more intense timbre” to the engine note.

BMW has tried to answer criticisms from some testers that the cabin never quite felt special enough by making the previously-optional leather-covered dashboard standard across the range. An updated version of BMW’s head-up display – which projects speed limits and navigation instructions onto the windscreen – is now equipped as standard. Piano black trim surrounding the heating and audio controls, flashes of chrome trim and LED lighting complete the changes inside.

Owners can now tweak the driving settings more precisely than before, with the ability to adjust the responses of the dampers, steering and throttle via the iDrive control system.

Prices for the “new” range won’t be officially announced until the official launch of the 6 Series in January, while order books will open in the UK on 1 March.

Take a look at our review of the Mercedes SL, Audi A7, Jaguar XK and Maserati GranTurismo before committing to the new BMW 6 Series.