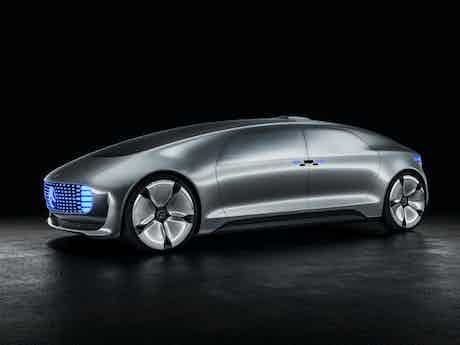 Chauffeurs: your days are numbered. Mercedes has revealed an autonomous car offering the last word in opulence

Mercedes-Benz has revealed its vision of future business-class motoring in the form of the F015 Luxury in Motion Concept.

The fact that the company chose to show off the model in public for the first time at the Consumer Electronics Show (CES) in Las Vegas, rather than a traditional motor show, hints rather strongly at the advanced technology that the F015 showcases.

Compared to the cars we currently potter about in, definitely. The unusual shape is down to the fact  it has been designed to be an autonomous car from the outset. The F015 can be driven in either manual or fully autonomous modes, which Mercedes claim will allow drivers to be “relieved of work and stress in situations in which driving is not enjoyable”. Driving in congested cities, in other words.

You can tell when the F015 is in automated driving mode by a blue hue emitted by the front and rear LED lighting arrays. The colours turn white when manual mode is engaged. Mercedes says the car can communicate with other road users: the lights display different messages and signals to inform other drivers of what the man or machine intend to do next. Or to put it another way, slightly more specific versions of brake lights and indicators.

The F015 makes extensive use of carbon-reinforced plastic, aluminium and steel in its construction, resulting in a weight that Mercedes claims is as much as 40 per cent lighter than current production cars of a similar size. The Luxury in Motion is powered by hydrogen fuel cells, which does away with the need for a large bonnet area housing an internal combustion engine. It also offers unique possibilities for packaging the interior and provides what Mercedes describes as a “mobile living space.”

So I imagine the cabin is pretty swish then?

It certainly seems so. As with the exterior, it’s impossible to argue that the cabin is similar to anything else on the road. The four passenger doors each swing open 90 degrees (the back doors are rear-hinged to improve access) to reveal a clean, bright, and most certainly unique interior.

Every surface is trimmed in walnut, glass, white leather or aluminium, while six screens dotted through the cabin can be controlled by a combination of touch, eye-tracking and gesture recognition. In autonomous mode, the steering wheel hides neatly within the dashboard. Select the manual override, and it magically appears to greet you as the front two seats turn to face forward.

Mercedes says the unique seating arrangement offers unrivalled space – we’d certainly hope so given the, uh, challenging looks. This extra space also comes courtesy of the fact that the F015 is huge: at 5,220mm long is is almost the same length as the long-wheelbase variant of the S-Class, the wheelbase is 445mm longer, and it is wider and taller, too.

When can I buy one?

Not for a very long time. There’s every possibility of autonomous cars such as this roaming our cities in the future, but everything seen here would be hugely expensive right now – and we need to give it a decade or two for human tastes to align with Mercedes’…