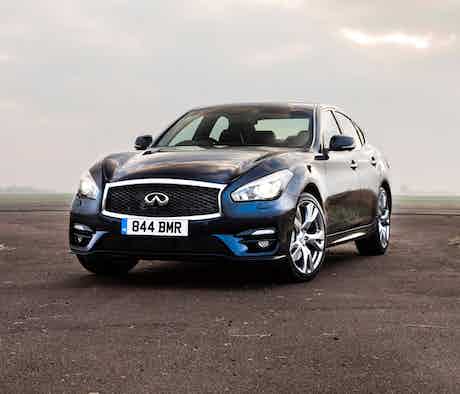 Infiniti’s BMW 5 Series rival gets a new diesel engine and a lower basic price – will it tempt UK buyers?

Infiniti hopes to steal sales from the likes of the BMW 5 Series by dropping the price of its Infiniti Q70 and fitting it with a fuel-sipping new diesel engine. The rejuvenated range now starts from £32,650.

The entry-level model comes with a 168hp 2.2-litre diesel engine and a seven-speed automatic gearbox – a combination which, Infiniti says, “offers stirring performance”. Emissions of 129g/km mean it qualifies for tax of £110 a year. As before, you also have the choice of a 316hp 3.7-litre petrol V6 and a 359hp petrol-electric hybrid.

Few people will choose the Q70 over the BMW 5 Series (for reasons we will get to later), but in fairness Infiniti is well aware of this and has loaded its car with kit to sweeten the deal. As a result, you get standard-fit powerful LED headlights, sat-nav, a leather interior with vented front seats, all-round parking sensors and a reversing camera. Upmarket (but not entirely convincing) looks come courtesy of chrome exterior highlights and 18-inch alloy wheels.

Upgrade to Sport (from £35,850) and you can add to that list with huge 20-inch alloy wheels, an aggressive-looking front bumper and uprated brakes.

Opting for the Tech pack (price varies depending on model) boosts safety and luxury levels and can be added to both Premium and Sport models. It adds equipment such as active cruise control, lane departure prevention, an around-view monitor, a 16-speaker Bose stereo, and an air-conditioning system that pumps a soothing forest-based aroma through the interior. We’re not making this up.

In isolation this all sounds impressive enough, but a significant problem comes in the form of the BMW 520d. It lacks the equipment levels of the Q70, but is better in almost every other way – including being cheaper to buy and run. For that reason, the Q70 is likely to remain a rare sight on UK roads.