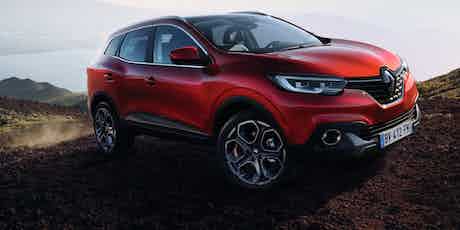 On the back of the Nissan Qashqai’s sensational success, Renault has revealed its own version of the family-friendly SUV

The Nissan Qashqai has been a runaway sales success for the Japanese marque so, naturally, their French Alliance partner Renault has revealed its own version – the Kadjar. Sitting above the Captur, the new model will feature a choice of two- and four-wheel drive and petrol or diesel power.

Following a massive restructure of its model line-up to enhance its profitability, Renault is pinning its hopes on the Kadjar as its spearhead to recover lost market share. It’s the first Renault to be built in China and, as a result, will form the brunt of the brand’s marketing strategy in the growing Chinese market – but Renault also hopes it’ll become a UK sales success.

The Kadjar sits on the same platform as the Nissan Qashqai. This means the Kadjar can share engines, gearboxes and infotainment systems while retaining the French brand’s identity.

There are no details yet on what will reside under the bonnet but, based on the engines available in the Qashqai, it’s reasonable to assume that petrols will be covered by a 1.2-litre turbo engine and, if the company decides to, a 1.6-litre turbo for higher performance. Diesels – likely to make up the majority of sales – will probably be a choice of 1.5 and 1.6-litre units, with the former already garnering accolades from critics.

Its public reveal will take place at the 2015 Geneva Auto Show on 5 March and left-hand drive cars will hit the road in the summer with right-hand drive UK-spec cars hitting our roads later in the Autumn. Judging by the pricing relationship between the Nissan Juke and the Renault Captur, it would be reasonable to expect the Kadjar to cost from just under £19,000.

We’ll have a full review of the Renault Kadjar once the motoring press has been let loose on it but, before then, take a look at our review of the Nissan Qashqai and the Kadjar’s smaller brother – the Renault Captur.