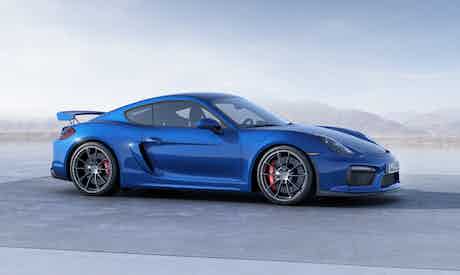 Porsche has announced the most extreme version of the Cayman yet. The GT4 is lighter and more powerful than any that has come before, and aims to deliver similar thrills to the 911 GT3 at a fraction of the price – and we’re rather excited about it.

The GT4 is designed to be as fast around the race track as it is civilised on public roads, and Porsche is keen to emphasise the inspiration taken from previous mid-engined Weissach-made road-racers such as the 911 GT1 and 918 hypercar.

Porsche says it has set a 7:40 lap around the gruelling Nurburgring Nordschleife circuit. To put that time into perspective, the GT4 matches the Mercedes SLS over the 13.7-mile course, and is only two seconds slower than the Ferrari 458 and Lexus LFA – an impressive result!

How have they managed that then?

It doesn’t take long to see the changes from the outside. The aggressive look starts with the lip spoiler running the width of the front bumper sitting below larger air intakes. Around the back there is a large fixed wing and a diffuser in the rear bumper, with two centrally-exiting exhaust pipes poking out. These tweaks aren’t for show though – they help to produce significantly more downforce front and rear.

The brakes, made of carbon ceramic, are described by Porsche as “generously sized” – we’d say huge – and are lifted straight from the 911 GT3. They make the 20-inch alloy wheels a necessity. The whole car has been lowered by 30mm to help improve stability and sharpness, and give the added bonus of complimenting the more purposeful look.

The interior is suitably spiced up, with the inclusion of sports seats made from a carbon fibre-reinforced plastic shell, trimmed in alcantara and leather. A 918-esque steering wheel further lifts the cabin, as do the functional belt strap door pulls and yellow needles for the dials. If you choose the red or yellow exterior paint finishes, you can opt for matching stitching for the leather inside.

What powers the Cayman GT4?

The engine is derived from the unit found in the 911 Carrera S. That means that a 3.8-litre flat six engine is mounted in the space just behind the front seats, producing 385hp at 7,400rpm. In a car weighing a little over 1,400 kilos, performance is nudging into supercar territory. The launch from 0-62mph takes 4.4 seconds, and it doesn’t run out of puff until 183mph. Keen drivers will be delighted to find that the gearbox is a six-speed manual, and there’s no automatic option.

Keeping all of that power in check will be oodles of clever technology. Dynamic gearbox mounts can firm up under hard cornering to offer a sharper turn-in, while a torque vectoring system brakes the inside wheels when cornering to force the car onto its intended trajectory.

There is very little on the market to offer the mix of extreme performance and everyday usability. The closest competitor is likely to be the Lotus Evora S – another two seat, mid engined coupe. It can’t quite match the performance of the GT4 – it’s 40hp down on power and takes 0.4 seconds longer to it 62mph – but many testers believe it has one of the greatest chassis fitted to any road car.

When can I have one?

Order books are open for the GT4 now, and prices will start from £64,451. Best get your order in fast, because we imagine there’ll be a queue of petrolheads trying to get their slice of reasonably priced track-ready Porsche action.

If you need something to whet your appetite, take a look at Porsche’s… interesting… advert for the Cayman GT4. Apparently it’ll loiter in German town centres scrawling Nurburgring graffiti on nearby walls, before making children stop and stare as they cross the road – perhaps only one of those things is likely!