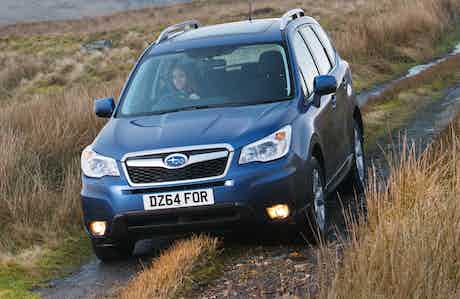 The Subaru Forester has always been an also-ran in the world of family SUVs – could this new diesel and auto gearbox combo reverse its luck?

In a world populated by the BMW X3, Audi Q3, Nissan Qashqai and Mazda CX-5, there isn’t much reason to pick a Subaru Forester over any of its established rivals. This latest model with a new gearbox and engine combo is aimed squarely at the family market.

There are no exterior changes of note other than the addition of a shark-fin style antenna on the roof in place of the older pole style one. We’ve taken a look at what has changed.

The 2.0-litre turbodiesel in the Subaru puts out 146hp and 258lb ft of torque – enough to propel the car to 62mph from rest in 9.6 seconds. It still uses Subaru’s signature flat-four or ‘boxer’ engine layout. More usefully for buyers, the engine emits 158g/km of CO2 and can average 46.3mpg.

While none of those figures are ground-breaking, the engine has been extensively reworked to be much more refined than before. A new fuel injection system, radiator and oil cooler have been added along with revised glow plugs and turbocharger settings – all with the aim of reducing vibration and noise.

The new auto – a continuously-variable type – has also received extra soundproofing to cut unwanted noise from the cabin. The CVT offers hill-descent control and Subaru’s X-Mode system – a version of torque vectoring by braking – to help grip through corners. It offers seven simulated gears so keen drivers are served too.

The old dealer-fitted Pioneer infotainment unit has been ditched in favour of a proper factory-fitted proprietary unit. The touch-screen system offers sat-nav, Bluetooth and StarLink to access internet information from your smartphone. A multi-function display atop the dashboard now features a turbo boost gauge in the fastest petrol models to emphasise the car’s ‘sportiness’.

Material quality has been emphasised for this update and Subaru has replaced the dash central fascia with a piano black one. There are new metallic elements in the cabin and controls for the heater have been made more tactile.

Unquestionably the addition of a new diesel engine and automatic gearbox mean the Forester will appeal to a much broader range of buyers but don’t forget to check out the cars the Subaru needs to beat – the Audi Q3, Nissan Qashqai and Mazda CX-5.