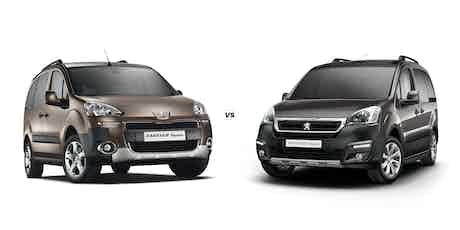 Van-based MPVs or, in Peugeot speak, Leisure Activity vehicles are a growing sector – we compare its new Partner Tepee against its forebear

Not all big families want a big car. Just because you’ve got loads of kids, pets or elderly relatives doesn’t mean you’re obliged to get a large MPV. For some, the sheer size of the Ford Galaxy or SEAT Alhambra makes them totally impractical for scything down tight British residential streets.

In step van-based MPVs – their wide bodies mean these models can squeeze more seats in than an equivalently sized car. This means you can get a seven-seater van-based MPV that’ll occupy no more space on the road than a smaller five-seat MPV

Peugeot has recently updated the Partner Tepee MPV so, to find out exactly what’s changed, we’ve poured over each with a magnifying glass to show you what’s new.

Considering the Partner Tepee is based on a van, it’s understandable that it looks a little awkward. This hasn’t stopped Peugeot grafting its latest ‘family face’ onto the Partner – big headlights flank the new rectangular grille and the lower air intakes now have LED daytime running lights either side of them.

The side is effectively unchanged from the previous model, the only true difference being the new eight-spoke alloys filling the wheelarches. The rear is, similarly, the same with the only noticeable difference being the smoked brake light lenses. Two new colours join the line-up for 2015 – Moka grey and Artense grey.

Little in the cabin has changed. The layout is much the same with a high-mounted centre console handling climate control and audio controls. New grey elements have been added to the interior to keep it fresh and, on higher-spec models, there’s now a choice of red seat trims on top of the optional blue.

On the older Partner, the infotainment screen was integrated into the top of this unit but it has now moved onto the front of the console and features the latest operating system. A choice of five- or seven-seat layouts is available and all but the frontmost seats are removable. If you remove them, you’re left with a flat floor and a giant load bay between 675 and 3000 litres.

Two basic engine types are offered with the Partner Tepee – a 1.6- petrol and 1.6-litre diesel. The petrol comes in 98 and 120hp versions and the diesel in 75, 100 and 120hp guises. The 100hp diesel can be had with Peugeot’s ETG6 six-speed automatic gearbox although, in tests, some critics have called this ‘box jerky.

Aimed at the ruggedised ‘Outdoor’ model, Peugeot is offering a system called Grip Control. Essentially an advanced traction control, it allows the two-wheel drive Partner to cover tricky terrain – just don’t expect it to tackle any off-roading courses. A dial on the centre console allows the driver to pick the mode most appropriate to the conditions.

The central infotainment screen is standard on top-spec models and optional on mid-range versions. It encompasses DAB radio, Bluetooth, music streaming from a phone or the built-in hard drive and sat-nav instructions. The screen is also available with a reversing camera to help navigate tricky manoeuvres.

Using short range light-radar, the active city braking system can prevent low speed impacts by monitoring what’s happening in front of the car. A large sunroof is also available and comes with in-roof storage to complement the 90-litres you already get at various points inside the cabin.

Van-based MPVs typically have commercial vehicle underpinnings which, given their more cost-effective nature, usually means they miss out on the best safety technology reserved for passenger cars. Despite this, the Partner Tepee gets automatic emergency braking to add yet another layer of safety for you and your family.

Like all modern cars, it gets a full suite of airbags and crumple zones to ensure that, should the worst happen, your precious cargo remains unharmed.

Check out our reviews of the cars the Peugeot Partner Tepee needs to beat – the Fiat Qubo and the Citroen Berlingo Multispace. Then head over to our car configurator to find out how much you could save on your next car.