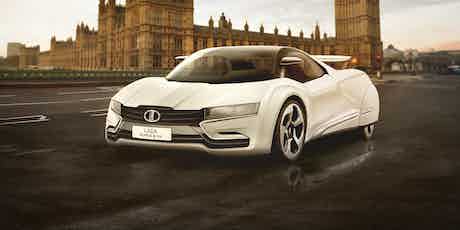 Lada is to make its triumphant return to the UK with its Super Biva electric supercar. We don’t even.

Lada is set to join the likes of Kate Bush, Ebola and turbocharged F1 cars in the ranks of things that have risen again which really, really shouldn’t have. The Russian automaker has announced a battery-powered electric supercar aimed squarely at the likes of the BMW i8 and the Tesla Model S – and it’s going to be sold in the UK.

It’s called the Super Biva – standing for Battery-Integrated Velocity Achiever and, you have to admit, it’s certainly eye-catching. A battery-powered electric supercar was the obvious next step for Lada after the Niva off-roader and the Kalina supermini and we’ve got ‘exclusive’ images.

Its front end is styled like Lada’s upcoming XRAY and Vesta concepts so the broad, bluff grille flows aggressively into the headlights for a menacing and yet slightly bemused expression. C-shaped LED daytime running lights sit below the grille and are in no way stolen from Mitsubishi’s PHEV Concept S…

The stubby bonnet leads up to the passenger compartment which has space for two occupants – assuming you can convince someone to sit in the passenger seat. Those seats are highly advanced Russian-built units with groundbreaking sensors which can detect up to 300 times per second if the driver is transgender and needs their licence revoked.

Down the side, the bodywork has muscular creases to enhance the masculine look of the car – Lada designers say they used Vladimir Putin’s exercise DVD for inspiration. The covered rear wheels enhance the Super Biva’s aerodynamic profile while simultaneously protecting the tyres from small arms fire – a frequent customer request.

Lada’s designers admitted they had not styled the back yet saying “at this moment in time, we don’t foresee the Super Biva being able to get in front of many supercars so it’s unlikely anyone will ever see the back of it”. Designers did mention the boot has more than enough room to fit two bound six-foot objects side-by-side while still accommodating the running gear.

A member of the carwow team was allowed to see the interior, but was then immediately taken around the back of the chemical sheds and shot.

Lada is aiming high with the Super Biva so has given it some serious punch to do battle with the BMW i8 and Tesla Model S. All four wheels have an electric motor built into each hub to provide four-wheel drive and true torque vectoring. Echoing Ford’s announcement of the Focus RS’s power output, Lada says the Super Biva has “well in excess of a very big number” of horsepower or, as they’re known in Russia, loshadpower.

When pressed by carwow, the Super Biva’s engineers told us the car was “capable of accelerating from 0 to 60mph” and has “a top speed greater than some other cars”. Being battery powered, the Super Biva can be recharged from a household socket or rewired by the customer for high voltage outlets although, Lada admits, this is “dangerous”.

Lada will offer a range-extending combustion engine later in the Super Biva’s life. This single-cylinder engine generates extra power for the batteries and is fuelled by Russia’s most abundant hydrocarbon – vodka. The combination of the electric motors and combustion engine give the car a theoretical range but Lada didn’t tell us and we couldn’t be bothered to work it out…

It should handle well around corners. Lada has developed a new lightweight material for the chassis made of a new, abundant resource in its home country – all the oligarchs’ money that isn’t being spent in London thanks to worldwide economic sanctions. The notes are pulped and form the chassis and most of the body panels.

Lada wants to offer its customers a straightforward buying experience with the Super Biva. As a result, almost all equipment will be offered as standard including an AM radio, cassette deck and Ox input – a system where you can put an ox in the car via the rear bootlid. The only option is the paint – dependent on whether Lada has some or not.

A popular option on Russian roads are dashboard-mounted cameras for insurance use in the event of an accident. The Super Biva goes a stage further with multiple cameras facing in front and behind filming in full-4K for the optimum crash replay performance. There’s even a button on the dash to directly upload the crash video to carthrottle.

Finally, Lada has included a system that, it claims, will reassure anyone worried about the range or longevity of the car. Should the Super Biva’s systems detect a problem, it’ll download the latest bus and train timetables from the internet and suggest the best alternative way to complete your journey.

Engineers remained tight-lipped about the specific safety details of the Super Biva but did mention that “when not in the event of a crash, it’s exceptionally safe”. Lada has combined several driver aids including lane departure warning, blind spot indicators and adaptive cruise control into one convenient device it’s calling ‘a mirror’.

If you liked this then take a look at carwow’s slightly more realistic creations, including our version of the Apple Car, our Ken Block Ford Focus RS concept, our rendition of Tesla’s future lineup and our Jurassic World-inspired Mercedes GLE Coupe.

Don’t forget to see how many Rubles you could save on your dream car in our car configurator and take a look at our deals page for our very latest discounts.