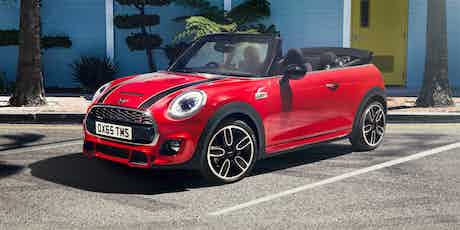 Details have been released for the brand new Mini Convertible. Get the low-down on all its price and specs before it goes on sale in March

Mini has released details of a brand new Mini Convertible which will arrive in Cooper, Cooper D and Cooper S variants when it goes on sale in March 2016. Like the outgoing car, it’ll prioritise style over function but this latest model offers more space than ever.

The new car gets improvements to engines, refinement, equipment levels and the operation of the electric roof. It enters a hotly contested market currently occupied by the Fiat 500C and the Citroen DS3 Cabriolet.

The new grille design is much deeper and now extends below the number plate, framed by a thicker chrome band. The lower bumper intake is much thinner and now lacks the central strip of chrome detailing. More sharply contoured bumpers house the fog-lights and the headlights are now more deeply recessed into the leading edge of the bumper. The new version is 98mm longer and 44mm wider than the existing model.

The familiar Mini badges on the front wheelarches are now mounted more noticeably and the rear foglight is now positioned lower. The rear light clusters are now larger and squarer while changes to the rear bodywork includes sharper edges at each rear corner.

The interior seating has been redesigned to improve driver and passenger comfort as well as making entry and exit much easier. Larger seats with more extensive adjustment are fitted to all new models. Rear seat passengers are now offered a more flexible range of storage options.

Where older Minis would position the speedometer in the centre of the dashboard, the new car features a large central infotainment display. A red start rocker switch has been fitted to the centre console and the instrument binnacle remains fitted to the steering column. Customers can choose from a wide range of interior trim colours, chrome detailing and lighting packages to personalise their Mini Convertible.

The turbocharged petrol engines available on the new model range from a 136hp 1.5-litre three-cylinder in the Cooper to a 2.0-litre four-cylinder with 196hp in the Cooper S. The latter is the fastest model in the range so far and can jump from 0-60mph in just 7.1 seconds when fitted with the optional six-speed automatic gearbox. CO2 emissions for these cars are 119g/km and 139g/km respectively and fuel consumption figures are 55.4mpg and 46.3mpg.

The Mini Convertible Cooper D sports a 1.5-litre three-cylinder turbodiesel engine which, although slightly slower than the other two (0-60mph will take 9.9 seconds), is able to return up to 70.6mpg and emit just 100g/km of CO2.

The Mini Convertible features multi-link rear suspension – unusual for cars in this category – allowing it to find a good balance between comfort and agility. Optional adaptive suspension lets the driver choose from a softer, comfortable ride or a firmer, more sporty one.

The Convertible has undergone extra strengthening and stiffening in the front, rear and sills to ensure it’s as composed as the hatchback over rougher roads. The windscreen has been reinforced and aluminium protection bars which deploy in an accident have been fitted to ensure that the Convertible can protect its occupants if it were to roll over.

The electric folding roof on the new Mini has been tweaked and improved to be quieter and quicker in operation – it can now be fully retracted in just 18 seconds. The fabric can now be specified with a unique woven ‘Union Jack’ graphic on the new Convertible.

Thanks, in part, to the larger dimensions of the new car, the Mini Convertible’s boot space has been improved by 25 per cent making weekend jaunts a more viable possibility. The opening is small but can be improved by raising the rear roof cover.

All models get air conditioning, keyless engine start and USB and aux input. The optional Mini navigation and XL navigation systems include an infotainment system with a large 8.8-inch colour display and smartphone integration. A new feature exclusive to the Convertible is the ‘rain warner’ function – if you leave your Mini parked with the roof down, it’ll text you if rain is forecasted in that area.

When the new Mini Convertible goes on sale in March 2016, it’ll cost £18,475 for the basic Cooper model with a manual gearbox. The Cooper D manual costs £20,225 and an automatic is available for both these models for an extra £1,270.

The Mini Convertible Cooper S costs £22,430 for the manual and the automatic option is a marginally more expensive £1,625 optional extra.

If you want a convertible but you’re not sure which one, why not check out our article on the 10 best roadsters of 2015. Our car chooser and deals pages can help you decide exactly which car is best for you.