News Subaru BRZ STI and faster GT86 on the way

Subaru BRZ STI and faster GT86 on the way 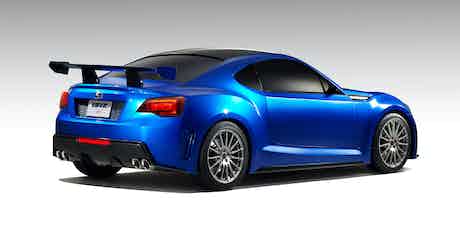 Subaru patent images appear to show a heavily modified BRZ, is a more powerful STI model on the way? Here’s what we know so far…

Sales of both the GT86 and BRZ have slowed since launch and both companies will be looking to revive some interest in the lightweight sports car through more powerful performance models.

If either car sparks your interest, you can try out either the Subaru BRZ deals or Toyota GT86 deals pages.

Subaru teased a preview of the BRZ STI at the 2015 New York Motor Show but, despite significant interest, the brand seemed to have canned the project – until now.

The new rear bumper features two very large centre-exit exhausts and a beefy rear diffuser. Contrasting colours on the rear wing, roof and bumper trims could hint at the use of functional carbon fibre components, or could simply be styling features.

No engine upgrades have been confirmed but it is possible that the 2.0-litre petrol flat-four engine could benefit from a turbo or supercharger in the STI model. Subaru has a wealth of experience working with such engines so could easily coax more power from the BRZ unit.

With great power comes the need for greater control, and we expect some significant suspension and brake upgrades to accompany the more potent engine. The concept and patent images certainly appear to show lowered suspension and new alloy wheels.

If a more powerful model is on the way, it could be a few years before we see any on the roads – the facelifted BRZ and GT86 we spotted earlier this year is likely to be released first.

Save money on your new sports car

If you’re looking for a simple sports car that’s great fun to drive, try out either the Toyota GT86 deals or Subaru BRZ deals pages to let carwow find you a great deal. If you’re not sure which car to buy, our car chooser and deals pages are here to help.