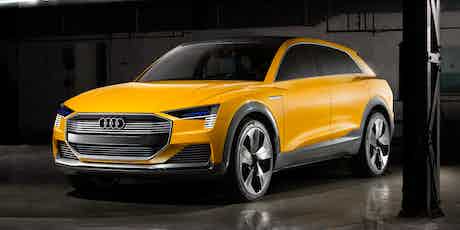 Known as the h-tron quattro, the concept previews an upcoming SUV which will be powered by hydrogen fuel cells. Essentially a fuel-cell powered version of the Q6 e-tron concept, Audi has flaunted its expertise in this area previously with the 2014 A7 h-tron. The latest developments in hydrogen fuelling have seen Audi’s fuel cell technology become smaller, lighter and more efficient than before.

The h-tron, shown at the 2016 Detroit Motor Show, draws its power from a mix of hydrogen fuel cells and a small lithium-ion battery. Two electric motors transfer this energy to the road, delivering a system output of 282hp. That figure is enough to help the h-tron to a 0-62mph time of “under seven seconds” and on a top speed limited to 124mph.

The h-tron sits on a shortened version of the platform that underpins the Audi Q7 and closely relates to the next-generation Q5. Efficiency is helped by an ultra-low aerodynamic drag figure – a result of 0.27 Cd is remarkable for a SUV – a score aided by an active suspension system that lowers the car by up to 30mm at motorway speeds. The slippery shape contributes to a theoretical range of 373 miles.

Unlike fully electric cars, refuelling times are not an issue – at four minutes to fill the tank, the wait is barely any longer than for a regular petrol or diesel vehicle.

The h-tron’s cabin gives a further hint to some of Audi’s upcoming models. The dash is dominated by three beautifully sharp OLED screens – a format which rumoured to be used by the next Audi A8. There’s room for four inside, but the individual rear seats of the concept will likely be replaced by a three-seat rear bench in production models.

As with the interior design, some of the latest autonomous driving tech found in the h-tron will likely first see service in the replacement for the A8. The system computes a real time model of the car’s surroundings, enabling the h-tron to autonomously park and – in what will surely be a welcome feature for any regulars on the M25 – cover stop/start motorway driving at speeds up to 37mph.

We’ve predicted in the past that the all-electric Audi Q6 e-tron to be priced from around £60,000. Expect, therefore, the more complex hydrogen technology of the h-tron to push prices beyond that figure.

Making this tech financially viable for production is the key here, and as a result, the h-tron won’t hitting the roads of the UK any time soon – although this may change if the UK hydrogen refuelling network grows significantly.