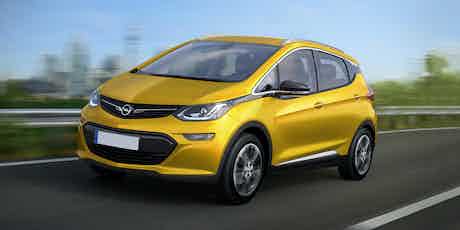 Opel – Vauxhall’s European sibling – will launch the Ampera-e electric car in 2017. Based on the Chevrolet Bolt, it could make it to the UK

Vauxhall’s European partner, Opel will launch the Ampera-e – a new electric family car in 2017. The five-door, five seater claims to be one of the most advanced of its type and aims to become a more affordable entry point into electric ownership.

The car was announced at an event in Bochum, Germany and is almost certainly based on the Chevrolet Bolt EV platform. The brand says the Ampera-e is part of its new model strategy that will see the launch of 29 vehicles between now and 2020.

While there’s no confirmation on whether it’ll arrive in the UK yet, it seems likely that Vauxhall will bring a right-hand-drive version to our shores. Before that happens, check out our list of the best electric cars on sale.

The Ampera-e is predicted to use the same 197hp electric motor found in the Bolt. The cleverly designed flat battery is mounted underneath the car meaning there’ll be plenty of room inside the cabin.

From a standard 240-volt UK plug, you can fully replenish the battery in about 9 hours. Like the Bolt, it’s expected to offer a 200-mile range when it goes on sale – about 45 more than the latest Nissan Leaf.

The car will also feature the brand’s OnStar and connectivity and infotainment technologies that will allow the integration of smartphones and other electronic devices.

In terms of styling, the Ampera-e will echo the profile of its US sibling, which was strongly influenced by aerodynamics to maximise energy efficiency. The front end features a broad grille flanked by angular headlights with LED daytime running elements.

Prices for the car have yet to be announced but the Chevrolet Bolt the Ampera-e is expected to be based on costs from $30,000 so European models could cost from £25,000 and up.