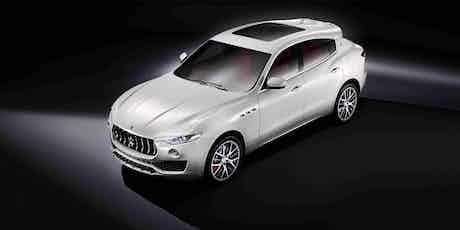 Maserati has finally revealed images of its first SUV – the Levante. Here’s what we know so far about this hotly anticipated luxury car…

Maserati has a rich history of building luxury sports cars but the Levante SUV is a brave new direction for the Italian brand. Official photos have revealed what the exterior of this high-riding SUV will look like ahead of a public unveiling at the 2016 Geneva Motor Show in March.

If you can’t wait to get your hands on the Maserati Levante check out our list of the best luxury SUVs for a taste of what’s on offer.

Jaguar and Bentley have arguably shown that sports car styling can inspire attractive SUVs with the recent F-Pace and Bentayga. Maserati is hoping to continue this trend by borrowing design cues from its current range of luxury sports cars.

The broad front grille and lower air-intake are very similar to the Ghibli sports saloon, but an additional pair of fog lamps help fill the tall front bumper and make the car look a little tougher. Chunky details including the enlarged triple side vent holes and front underbody guard help visually shrink the body of this large car, preventing the Levante from looking too bloated.

The rear is a little more curvaceous than some recent Maseratis with taillights and a roof-mounted spoiler similar to that used on the Porsche Cayenne making it clear where the car is aimed. Quad-exhaust tips and a rear diffuser ensure the Levante looks sporty as well as tough.

No official images have been revealed of Levante’s interior but we can expect similarly luxurious upholstery, trim and equipment as the rest of the Maserati range. We expect a touchscreen infotainment system and swathes of leather but we will have to wait for the official launch in Geneva to find out.

We’d be surprised if it offered significantly less or more elbow- and legroom than the Ghibli saloon but, thanks to a taller body and a higher roofline, there should be noticeably more headroom. Equally, boot space should take a noticeable leap over the Ghibli thanks to a roofline that extends estate-like to the rear window.

Maserati hasn’t confirmed which engines will power the high-riding Levante but reports suggest the 3.0-litre V6 turbocharged petrol and diesel engines from the Ghibli will feature under the bonnet. It’s also been rumoured that a plug-in hybrid model will be launched at some point, too.

The petrol V6 will probably be available in two states of tune, producing around 350 and 430hp depending on the trim. These engines could push the Levante to 60mph from rest in 6.3 and 5.2 seconds respectively but, for drivers looking for even more performance, a turbocharged V8 version could make an appearance in the future.

An eight-speed automatic gearbox paired with ‘Q4’ all-wheel drive will be standard on all Levante models. Adaptive air suspension will feature and should help the Levante manage both smooth tarmac and off-road terrain with aplomb.

When it goes on sale, we expect the Maserati Levante to cost from £55,000 for an entry level diesel model, to £70,000 for the most powerful V6 petrol version. Turbocharged V8 and plug-in hybrid models could cost significantly more.

Final release dates will probably be available after the 2016 Geneva Motor Show but Maserati has hinted that cars are already rolling off the production line in Turin. A European launch is planned for early 2016 with global sales beginning later in the year.

If you can’t wait for the Maserati Levante, check out our list of the best luxury SUVs on sale today. If you know what car you’re after, use our car configurator to get a great deal, or take a look at our car chooser tool if you’re not sure what to buy next.