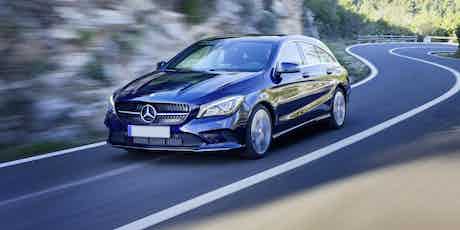 The facelifted Mercedes CLA and CLA Shooting Brake will be heading to the 2016 New York Motor Show. Here’s what we know so far…

Mercedes has announced the CLA range will receive a facelift ready for the 2016 New York International Auto Show. Both the saloon and Shooting Brake models will benefit from a number of exterior, interior and equipment upgrades. Read on to find out exactly what’s new…

Both the CLA saloon and CLA Shooting Brake will be fitted with new sporty front bumpers inspired by the new SL, complete with black diamond grille inserts and a contrasting trim strip. The exhausts are fitted flush to the rear bumper and panel gaps have been made as consistent and small as possible.

Customers can choose high-performance LED headlights as an optional extra that are not only very efficient, but cast a warmer, more ‘restful’ light than blue-tinted xenon alternatives.

Cavansite Blue joins the Mercedes CLA colour palette for the first time and customers can now pick from a range of five alloy wheel styles, including an all-new 18-inch, AMG designed set.

New seat covers, chrome-plated controls and a thinner eight-inch infotainment screen combine to help set the interior of the new car apart from the current CLA. There’s a wide range of upholstery and trim options available from black leather seats to ash wood dashboard pieces designed to mimic the appearance of yacht sails.

The most efficient model in the CLA engine range is the 180d version with 109hp and a manual gearbox – it’s capable of returning up to 80mpg and emitting as little as 89g/km of CO2. The Shooting Brake with the same engine is slightly less efficient thanks to its greater weight and altered aerodynamics, returning 79mpg and 94g/km of CO2.

Four-wheel drive will be available on the 220 4MATIC model paired with a 184hp 2.0-litre petrol engine while the 1.6-litre 122hp petrol engine, previously only fitted to the saloon, will now be offered on the Shooting Brake, too.

The high performance AMG CLA 45 gets a power boost to 381hp and can reach 62mph from rest in just 4.2 seconds. A number of unique exterior components will be available on this model including AMG badging, a new aerodynamics package, a bodykit and optional 19-inch alloy wheels.

As before, a range of driver assist and safety features, including an autonomous braking system to reduce the likelihood of rear-end collisions, is fitted to the new CLA. Automatic dimming taillights ensure the bright LEDs don’t dazzle drivers behind.

Save money on your new Mercedes CLA and CLA Shooting Brake

We expect prices for the CLA range to be announced after it’s shown at the 2016 New York International Auto Show. In the meantime, you could get a great deal on the outgoing model by visiting our Mercedes CLA configurator or Mercedes CLA Shooting Brake configurator pages. If you’re not sure what car to buy, our car chooser tool is here to help.