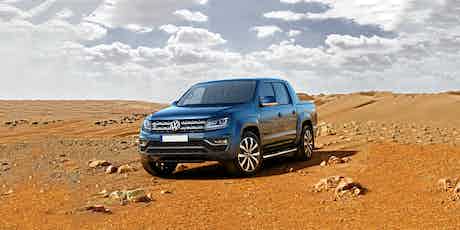 The Volkswagen Amarok gains revisions to the styling, interior and a powerful V6 diesel engine. It’s due towards the end of 2016

The Volkswagen Amarok pickup truck has been treated to a few mid-life revisions. Subtle styling changes, improved interior quality and a stronger diesel engine should keep the rugged VW competitive against the likes of the Nissan Navara and recently-revised Ford Ranger.

Most of the changes to the new model take place at the front. The bumper has been re-profiled courtesy of a larger, lower air intake, and a tweaked grille sits between headlights with more intricate internal graphics. The units now feature xenon with LED daytime running lights.

New alloy wheels measure 20 inches in diameter – not exactly a practical choice for a work vehicle – while changes to the rear are limited to new smoked tail light clusters.

Volkswagen has yet to reveal images of the cabin, but it says that a new dashboard brings the appearance more closely in line with the brand’s more traditional passenger cars. A reversing camera, which is displayed via the infotainment screen in the centre of the dash, is offered for the first time and should make this 5.25-metre truck easier to park. The front seats are also new, and aim to improve comfort during extended stints behind the wheel.

In a break from the current tradition of downsized engines, Volkswagen has replaced the old twin-turbocharged 2.0-litre diesel with something a little more substantial. A new 3.0-litre V6 turbo has been chosen for one reason – torque. It’s a vital quality for a commercial vehicle designed to carry more than a one-tonne payload, and the new unit’s 406lb ft maximum is 96lb ft greater than the old model.

Three power outputs are offered – 161, 201 or 221hp – and all comply with the latest Euro 6 emissions requirements. Buyers can choose from three drive options – rear-wheel drive only, switchable four-wheel drive with a manual gearbox, or permanent four-wheel drive paired to an eight-speed automatic. Equipped with the auto, the Amarok is claimed to achieve 37mpg.

Out on the road, the driving experience should be improved courtesy of bigger brakes discs and an electric power steering system said to improve precision.

The updated Amarok range will go on sale in the UK before the end of 2016. Thanks to the new engine, prices are expected to rise a little from the current model’s £20,930 entry-level.