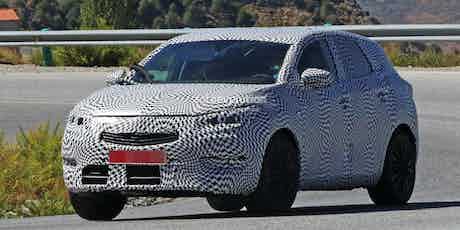 A replacement for the Vauxhall Antara SUV has been spotted testing following the launch of the refreshed Mokka X. The similarly sized Kia Sportage and Nissan Qashqai are just a few of the talented crossovers the yet to be named SUV will have to beat. Images courtesy of autoevolution give us our first glimpse of this new SUV.

In a bid to mark itself out, the bigger sibling to the Mokka X is thought to have a 2,675mm wheelbase – 30mm longer than the Qashqai. This will allow more legroom and boot space, making the Vauxhall a more practical proposition and better suited for those who often carry rear seat passengers.

The extended wheelbase is courtesy of the shared platform with the new Peugeot 3008 SUV. The mule is probably powered by one of many engines found in the current Astra lineup meaning a variety of petrol and diesel options will be offered.

The underpinnings of the 3008 and yet-to-be-released Vauxhall won’t have any other significant similarities beyond the platform. Vauxhall will install its own cabin design on the platform so won’t share much inside with the 3008.

The new SUV will probably feature Vauxhall’s latest OnStar onboard personal assistant. This system includes a 4G local WiFi hotspot, automatic crash response and access to an OnStar advisor who’ll help you locate your desired destination and send it directly to your car’s sat nav.

The smaller Mokka X costs from £17,590, so we can expect the bigger SUV to carry at least a £1,000 premium bringing it in line with the entry-level Kia Sportage and Hyundai Tuscon. The car is expected to go on sale sometime in 2017.