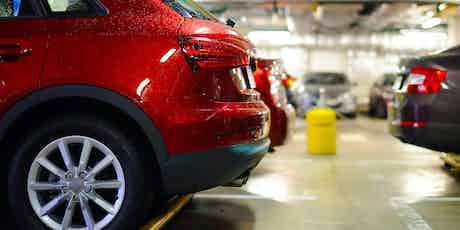 The London D-charge is a extra charge of £2.45 per hour for diesel cars to park in Westminster’s ‘F zone’ low-emission area. This charge goes into effect 26 June 2017, is automatically added to your parking ticket and applies to all diesel cars registered before 2015.

Westminster City Council has launched the trial D-charge scheme to tackle air pollution. It affects diesel cars registered before 2015 and whacks another 50 per cent on the price of parking over petrol and modern diesel drivers. This charge – the first of its kind – is an attempt by Westminster Council to discourage the use of highly polluting cars in these areas considering London regularly breaches legal levels of pollution.

How much will it cost to park a pre-2015 registered diesel car in a Zone F parking bay?

Which areas does this charge affect?

The charge is being implemented in Westminster’s ‘F zone’. This includes Marylebone, parts of Fitzrovia and the Hyde Park Area – otherwise known as parking sub-zones F1 though F6.

What cars will the D-charge affect?

The charge applies to diesel-powered cars registered before 2015. This is regardless of how polluting the car actually is or its overall purchase price so will affect Ford Fiesta drivers as much as it will Porsche Panamera drivers.

How do I pay the D-charge?

The D-charge will be included when you pay for parking. That includes paying by phone, using a physical payment terminal, a parking card or a smartphone parking app such as RingGo or Appy Parking. This means you don’t need to do anything extra to pay the D-charge, unlike the congestion charge that requires you pay it off separately.

How can I avoid the D-charge?

If you want to park in Westminster’s zone F and avoid the D-charge, you should pick a diesel vehicle registered after 1 January 2015 or a petrol or alternatively fuelled car. Alternatively, if you have to park in the Westminster area and you are driving a pre-2015 diesel car, you should locate a parking bay in any of the other nearby parking zones.

If yet another blatant cash grab by the Government is putting you off buying a diesel car, check out carwow’s best new car deals to see how much we could save you on a petrol alternative. For more options, head over to our handy car chooser tool.