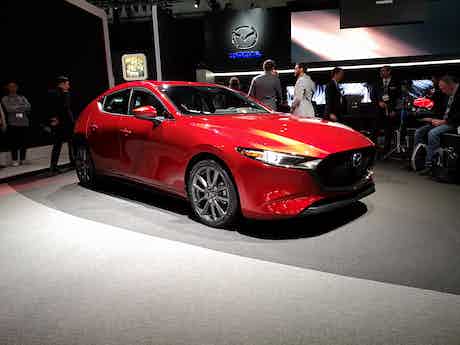 The LA motor show has hosted some of the biggest new car launches of the year. Keep reading for all the info

Audi, BMW, Kia, Mazda, Mercedes and Porsche have all revealed new models at this year’s LA motor show. Keep reading to find out all the new cars you can expect to see in a showroom near you.

Audi has revealed a concept version of its upcoming electric saloon – the Audi e-tron GT. With 590hp, you won’t be surprised to hear – it is quick. Incredibly so. It’ll explode (silently) from 0-62mph in just 3.5 seconds and has a brilliant four-wheel drive system that means it can be as challenging to drive as a milk float or as lairy as a supercar, depending on how you set it up. The GT has a 250-mile range and space for four people. Audi will charge around £100,000 when the car arrives in 2020.

BMW used the LA motor show to give the BMW M340i it’s first public outing. A car that’ll bridge the gap between the regular 3 Series and the fast M3 – the M340i is, for now, the fastest new 3 Series we have seen yet. With 374hp, four-wheel drive and a quick-shifting automatic gearbox, to call it a ‘warm’ saloon would be to do the car a disservice – it would, without doubt, show an M3 from 10 years ago a clean pair of heels.

Another BMW getting its first public in airing in LA was the 8 Series Convertible. It’s a luxurious convertible grand tourer that’s designed to cross continents with ease, getting you a lovely tan while you’re doing it. You can choose from a couple of powerful six-cylinder diesel engines, but the one you really want is the 4.4-litre petrol V8 with 530hp.

The 2019 Kia Soul doesn’t exactly scream ‘new car’, but under the familiar body shape it really is all new. In the UK, you’ll only be able to get it with a 201hp electric motor that’ll get it from 0-62mph in under eight seconds and have a range of more than 250 miles. Multi-link rear suspension means it’s also better in bends, while the practical interior has been given a significant infotainment overhaul.

One of the most anticipated launches in LA was the 2019 Mazda 3 – a car that we have been talking about since 2017. In terms of humdrum family wagons, cars don’t get better looking than the Mazda 3 and the interior is also pretty tidy. With Mazda’s sporty MO you can expect it to be a great car to drive and it also comes sporting a clever petrol engine that can burn fuel under pressure same as a diesel. That means more power and better fuel economy.

Mercedes used LA to show off its revised Mercedes-AMG GT sports car. It gets a new face to match the GT 4-door, new infotainment and revised driving aids. The big news, though, was the announcement of a new hardcore track special called the Mercedes-AMG GT R Pro – it gets revised aero and race-spec suspension. The result? This AMG GT is quicker than a Porsche 911 GT3 around the Nurburgring.

Undoubtedly the big news out of LA for petrol heads was the reveal of the new Porsche 911 – known as the 992. It gets (admittedly very subtle) new looks, more power and a Wet mode that means it can sense rain and adapt the car’s systems accordingly. Only the 911 Carrera S derivative was announced, it has 450hp, getting it from 0-62mph in 3.7 seconds and on to a top speed of 190mph.