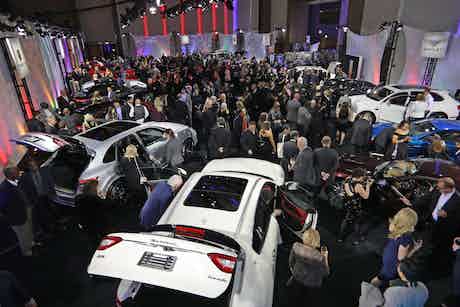 The 2019 Toyota Supra’s launch is finally upon us. Read on for that and all the other cars being shown at the Detroit motor show

The Detroit motor show will host the launch of a number of cars including a very special one – the long-awaited 2019 Toyota Supra, read on for all the latest.

While the Detroit motor show will provide a launch pad for several new models, the main one of interest to us Europeans is the 2019 Toyota Supra – the fifth generation of the company’s Porsche worrying sports car. It gets a 340hp, 3.0-litre straight-six engine and eight-speed automatic gearbox shared with the BMW Z4. The Toyota’s a coupe, however – not a convertible like the BMW – and is said by its maker to be a ‘serious performance car’ rather than a posing mobile. Expect the Supra to get a motorsport inspired interior and styling that focuses as much on aerodynamics as it does on aesthetics. Whether it’s that much better to drive than the underwhelming Z4 is something we’ll be finding out very soon.

The Lexus RC F Track Edition, it is hoped, will appeal to the enthusiasts that were left nonplussed by the standard RC F – its combination of a screaming V8 and rear-wheel drive sounded good on paper but that promise, somehow, never materialised when you got behind the wheel. Little is known about the RC F Track Edition but if the teaser pic is anything to go by, it’s set to get improved aerodynamics while Bob Carter, Toyota (owner of Lexus’) executive vice president for North America sales, recently teased “With the exception of LF-A [the company’s hypercar], this is the fastest most powerful vehicle that we’ve ever built”.

The Subaru STI S209 finishes off a trio of sporty specials from the Land of the Rising Sun. Sadly, it has yet to be confirmed for the UK – and the likelihood is it won’t be. That’s a shame because the car is said to boast 329hp – 28hp more than the standard WRX STI – and, like every Subaru since Colin McRae and Richard Burns won their Rally World Championships, has enough kudos to make British rally car fans weak at the knees.