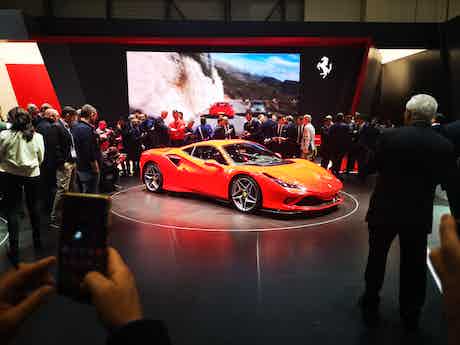 A motor show isn’t a motor show without a surprise launch. Enter the Alfa Romeo Tonale (let’s assume it’s not pronounced ‘toe nail’) that was such a big surprise even Alfa’s own UK press office knew nothing about it… Under that pretty skin lurks the same mechanicals as you’ll find under the Jeep Renegade and Fiat 500X – let’s pray it drives better than that stodgy pair.

Aston Martin has been rumoured to be building a mid-engined rival to the Ferrari 488 Pista and McLaren 720S and this Vanquish Vision concept shows us the car is one step closer to production. It uses an F1-inspired turbocharged V6 petrol engine, which is reported to produce close to 700hp, and has a body constructed from bonded aluminium.

The Lagonda All-Terrain Concept hopes to appeal to a different type of Aston Martin customer – one looking for an equally prestigious alternative to posh SUVs such as the Bentley Bentayga and the Rolls Royce Cullinan. Expect the Lagonda to have a posh interior that’s also practical enough for everyday use. Power comes from two electric motors – one at the front and one at the back – and while horspower’s not quoted, expect there to be enough to get the Lagonda from 0-62mph in under five seconds. Lagonda is apparently targeting a range of 400 miles.

Audi used the Geneva motor show to give you your first glimpse of the Audi Q4 e-tron concept and the e-tron Sportback – two electric SUVs. The Q4 e-tron concept is slightly smaller than an Audi Q5, but should offer comparable interior space. It has two electric motors to give it four-wheel drive, get it from 0-62mph in just 6.3 seconds and on to a top speed of 112mph. Clever battery regeneration and liquid cooling help the Q4 deliver a range of 280 miles.

The e-tron sportack is based on the Audi e-tron, but gets a sportier SUV-coupe style body. That’ll compromise rear-seat space, but you can still expect the Sportback to be practical enough to be viable family transport. With the same two electric motors and subsequent four-wheel drive as you’ll find in the regular e-tron, the Sportback will hit 60mph in less than six seconds.

Ferrari used Geneva to launch the F8 Tributo – a replacement for the 488GTB. Its twin-turbocharged 3.9-litre V8 produces 710hp, which is enough to get the car from 0-62mph in just 2.9 seconds and on to a top speed of 211mph. Naturally, it’s 40kg lighter than the 488 and has 10 percent more ‘aerodynamic efficiency’. Also, it looks very, very cool.

This is the Fiat Centoventi concept. Centoventi being ‘120’ in Italian, the car celebrates Fiat’s 120th birthday and is said to preview the styling of the new Fiat Panda which is due in the next couple of years. The Cetoventi is highly customisable inside and out and, because it’s powered by one small electric motor, is surprisingly spacious for its size. It has a range of 60 miles, but that can be increased to up to 300 miles by simply adding extra batteries in the slots provided.

Remember the Honda Urban EV – the small electric Honda we first saw at the 2017 Frankfurt motor show? Well, it’s now called the Honda e Prototype as its production date nears. Confusingly, that name will change again when the car goes on sale. Here at Geneva, Honda confirmed that the car will have a 120-mile range, but nothing else is guaranteed in terms of performance. Underneath the retro skin, the Honda has space for four adults and a high-tech interior with two huge screens and smaller monitors that do the job of wing mirrors.

This is your first glimpse of the Lamborghini Huracan Evo Spyder – the hardest version yet of the company’s mid-engine convertible. It’s 640hp 5.2-litre V10 is enough to get the car from 0-62mph in just 3.1 seconds – two-tenths of a second slower than the coupe, because it weighs 120kgs more. What matters though, is that the Spyder looks unbelievable and gets a roof that can drop in just 17 seconds.

Want a stylish car that’s also very practical? Mercedes has the answer in the form of its Mercedes CLA Shooting Brake which is on show here in Geneva. Combining a sloping roofline and frameless doors with a practical estate car boot, the CLA SB is sportier to drive than the A-Class it is based upon and shares that car’s engine. Also carried over from the A-Class is the CLA’s augmented reality sat-nav and classy interior complete with stylish air-turbine style vents.

Mazda has revealed its new CX-30 SUV at the Geneva motor show. Based on the new Mazds 3, the SUV sits between the CX-3 and CX-5 in terms of size. Mazda hasn’t told us a great deal about the car but it will be available with four-wheel drive and get the same Skyactiv-X petrol engine that will be fitted to the new Mazda 3. Using a combination of sparked and pressurised ignition, it’s supposed to deliver diesel-like fuel economy.

You’d guess a humble Peugeot 208 would struggle to grab your attention in a hall full of million-pound supercars – but not a bit of it, the 208’s one of the prettiest cars here thanks to its Sabre-Tooth Tiger aping front end. This is the electric model that has a range of more than 200 miles and a battery that can be recharged to 80 percent in just 3o minutes, but you’ll also be able to choose from a choice of petrol and diesel engines. Sadly, there’s no news yet on a pacey GTI model that could serve as a spiritual successor to the old 205GTI.

Pininfarina might be better known as s styling house that’s created cars for everyone from Ferrari to Peugeot and Volvo, but now it’s building its own cars – with spectacular results. This, then, is the Pininfarina Battista. It’s an electric car with four motors – one on each wheel – and a combined output of 1,874hp. It gets from 0-62mph in less than two seconds and can, allegedly, hit 180mph in under 12 seconds on its way to its 218mph top speed. Pininfarina claims a 280-mile range from a full charge, though – you’d guess – only if you drive significantly more sensibly.

Peugeot isn’t the only French company launching a new small car in Geneva – this is the new Renault Clio. Underneath its shrunken Megane body, the new Clio has an interior that’s crammed with two huge infotainment screens. It also has more space inside and a bigger boot than the car it replaces. You can choose from 1.0-litre petrol and 1.5-litre diesel engines and the Clio is also expected to get the same 1.3-litre petrol engine fitted to the Mercedes A-Class.

The SEAT el-Born is yet another electric car on show in Geneva. SEAT’s first bespoke electric car (it won’t be available with diesel or petrol) is based on the as-yet-unseen VW I.D. and has 204hp electric motor that’s good for 0-60mph in 7.5 seconds and a range of more than 260 miles. Inside, we’re told there’s space for four adults and all the latest infotainment. While the el-Born is just a concept for now, it’s said to be 95 percent production ready.

If that all sounds a bit too space age for you then how about this, the Cupra Forementor? No, it’s not a home-brew kit but the first standalone model from SEAT’s Cupra performance brand. It should be closer to production than the el-Born but still gets hybird power with a petrol-eletric motor producing 245hp and giving the car a 31-mile electric range. You can expect a production car to arrive in 2020.

While the new Skoda Kamiq is a car you can buy now, Geneva previewed a Skoda of the future called the Vision iV. One of ten electrified models the company will put on sale in the next few years, the Vision iV previews a new pure electric SUV. Powered by two electric motors to give it four-wheel drive, the Skoda has a range of more than 300 miles.

Fancy a Volkswagen Golf R but need that lifestyle image and the more practical body of an SUV? Then Geneva has the answer – it’s called the VW T-Roc R and it has a 300hp petrol engine that’ll get it from 0-62mph in just 4.9 seconds. Just so people know you’re not driving a regular T-Roc, the R comes with a subtle body kit complete with quad exhausts and 18-inch alloy wheels. You get sporty touches inside too, such as body-hugging sports seats, but what matters – that the R is as practical as any other T-Roc – is confirmed by its ability to comfortably carry four adults and their luggage.