News Licence to thrill – why our cars are real passion wagons

Licence to thrill – why our cars are real passion wagons 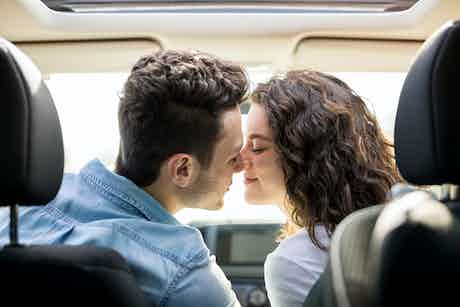 The most romantic location for Brits this Valentine’s Day isn’t a candlelit restaurant or dark cinema – it’s their car.

A poll of 2,000 people has revealed one in 10 had their first kiss in the car, one in seven has used their motor to get a girlfriend or boyfriend and half of Brits have even had an in-car quickie.

Roadside romps are more popular with men than women – 51 per cent of men admit to it, compared with 46 per cent of women – in a poll by carwow.

Wales (56 per cent) and the South West (55 per cent) are the nation’s hotspots for petrol-fuelled passions.

Shockingly, it’s more likely to be older drivers getting carried away behind the wheel and showing more than they intended in the rear view mirror – 52 per cent of those 45-54 and 51 per cent of the over 55s admitted to having sex in their cars.

It seems that a car’s suitability for an impromptu va va voom session is never far from our minds. When asked what they look for in a new motor, three in five replied boot space; 52 per cent look for leg room; half say good air con; one third check out the quality of the upholstery; 27 per cent want sturdy suspension; one in five check how far the seats recline and 17 per cent prefer tinted windows.

Away from those passionate encounters in the back seat, 46 per cent of those surveyed say passing their driving test was one of the most memorable moments in their life, while buying their first car was the top treasured memory for 27 per cent.

Cars also have a special place in our memories for their roles in some of the most popular films of all-time, too. Those surveyed selected the Fast & The Furious series as the most iconic, edging out Disney’s Cars trilogy, with The Italian Job in third place, Bullitt in fourth and the classic Herbie series in fifth.

Mat Watson, editorial director at carwow, says: “So many rites of passage moments in life are linked to our motors. Whether it’s that first kiss, driving a baby home from hospital, moving in to your first home or – as so many people seem to do – getting frisky, the car’s the go-to.

“carwow lets buyers choose and personalise the car they want at the click of a button to make those key moments in life even more memorable. And as it’s so quick to buy on carwow, it leaves you even more time to enjoy your new car adventures.”

The DeLorean would be a hydrogen cell vehicle as it ran on alternative fuel, a plutonium-fuelled nuclear reactor.

Herbie would in modern world would be a driverless, self driving car – as he was such a clever, cheeky personality.

If the very first Fast and Furious film, which came out in 2001, came out now and used all modern cars, Dominic Toretto’s famous 1970 Dodge Charger could be swapped for a modern-day Dodge Charger SRT Hellcat.

Chitty Chitty Bang Bang would be a Tesla owned by Elon Musk as it was highly advanced for its era.

Batmobile would be a Lamborghini Egoista, it’s a modern day batmobile lookalike.