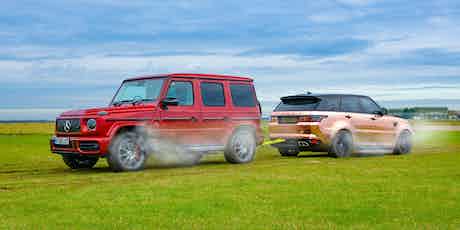 They’re both extremely powerful and luxurious 4x4s, but which opulent performance off-roader comes out on top in a tug of war contest? Watch the video below to find out.

On paper at least, the Range Rover Sport SVR and the Mercedes-AMG G63 aren’t that dissimilar. Both cars have all-wheel-drive systems tailored to make them as capable off-road as possible (which means they should have no trouble having a tug of war on grass), and they also have extremely powerful petrol V8 engines under the bonnet.

Even their power outputs are about the same, the Mercedes’ 585hp, 4.0-litre, twin-turbo engine having an ever-so-slight edge over the 575hp, 5.0-litre, supercharged V8 in the Range Rover Sport SVR. However, the AMG G63 does have a bigger advantage when it comes to all-important torque. Its V8 produces 850Nm of the stuff, in comparison with the Land Rover’s 700Nm.

So, does the Mercedes-AMG G63’s extra punch mean it will waltz away with the win, or can the Land Rover Range Rover Sport SVR snatch the victory away from the mighty Merc? Watch the video above to find out.