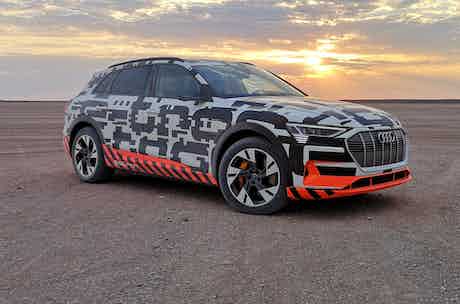 We have driven the new Audi e-tron, keep reading to find out if it has what it takes to beat the Tesla Model X.

You can expect the Audi e-tron to cost from £71,000 when it goes on sale towards the start of 2019. That means it’s priced to be an alternative to the basic Tesla Model X, which has slightly less power, but is more expensive than the Mercedes EQC electric SUV.

The Audi e-tron SUV might look pretty much like any other Audi SUV – garish wrap of this prototype notwithstanding – but it’s completely different underneath. Instead of running on petrol or diesel, the Audi e-tron uses electricity to power its front and back motors giving it four-wheel drive. For this reason, it’s an obvious alternative to the Tesla Model X. If you’re looking for an electric SUV that feels genuinely posh though, the Audi e-tron is the clear winner. Its interior looks like it has been dipped in a bucket of expensive metal trim pieces and high-quality shiny black plastics which are then assembled with laser precision. It doesn’t just make the Tesla Model X feel lower league – it’s as if it’s playing a different sport entirely.

That said, the Audi e-tron isn’t perfect. Let’s start with the high-tech infotainment system – its three huge, crystal-clear displays have definition that make real life look flat, but the touchscreens are a fiddle when you’re trying to concentrate on driving. Then there are the wing-mirror replacing cameras that are Audi’s version of reinventing the wheel. They’re optional and improve the e-tron’s aerodynamics, but aren’t as intuitive to use as plain old mirrors and their OLED displays reflect the dashboard’s shiny trims in bright sunshine.

It would also be nice to have the seven seats you get in the Tesla Model X, but there’s not much else you can fault the interior of the Audi e-tron. Up front there’s loads of space and the back has room for three tall adults even if the middle chair is a little firm. The boot is also exactly what you’d expect from a large SUV – the Audi e-tron splits the Q5 and Q7 in terms of size – big, square and easy to load with back seats that can be folded flat from the boot if you’re carrying more than a few large suitcases. For now, carwow has only driven the Audi e-tron on a slippy Namibian salt flat chosen because it was a great place to show of the car’s clever four-wheel drive. The e-tron can send its power to the front, back or both motors in milliseconds depending on which of the seven modes you choose in the car’s Drive Select.

Automatic, for example, lets you drive quickly but will also keep the car on the straight and narrow even if you deliberately try to get it out of shape. In combination with the quiet cabin and cosseting standard air suspension, it makes the Audi e-tron an extremely relaxing way to get from A to B. Dynamic mode reverses that calming effect, the car’s brain letting you slide around bends in a way that’s completely controllable even if you’re a novice. It’s more than likely something you’ll never ever do, but suggests that a spirited drive down a country road should fall well within the e-tron’s remit. There’s more to the Audi e-tron than just clever four-wheel drive, though. The 95 kWh battery underneath the cabin gives it a 50:50 weight distribution, a low centre of gravity and also makes it 45 percent more rigid than a conventional SUV helping make it even more fun to drive.

Of course, its main job is to power the Audi’s two motors which produce 355hp normally and 402hp for eight-second boosts in Dynamic mode. The latter means it can get from 0-62mph in 5.7 seconds – quick, but not as indecently rapid as a top-of-the-range Tesla Model X. Either way, it’s good to know the Audi e-tron has brakes that are up to the job of stopping it. Audi says their fly-by-wire, electro-hydraulic setup reduces braking distances by up to 20 percent compared with a mechanical setup. They can also pull off clever tricks like lock up in Offroad mode to dig into loose surfaces in the event of an emergency stop when you’re not on tarmac. There are some things technology can’t fix yet, and a glaring one is a problem common to all electric cars – a range that’s half that of a conventional car. The e-tron’s 248-mile limit will be fine most of the time but not great for holidays and the like, and it takes 30 minutes just to get an 80 percent charge using a 150 kW, quick public charger. If you’re in the market for an expensive SUV, the e-tron’s range will be the main hurdle between you and Audi e-tron ownership but – if you can live with that – there really is no other reason why you wouldn’t choose it over a petrol or diesel.

It’s not just the brake lights that draw inspiration from Audi’s range-topping luxury cars – the e-tron’s cabin looks very similar to what you’ll find in the A7 and A8, too. This means you get plenty of plush materials, a minimalist design and two large touchscreens built into the dashboard and centre console. Through the top screen, you’ll control the car’s sat-nav, media playback and smartphone mirroring features while the bottom display deals with the climate control and heated seat functions. If the A7 and A8 are anything to go by, however, the lack of any physical heating controls might take some getting used to. Much more intuitive, however, is the standard Virtual Cockpit system you get across the e-tron range. This replaces conventional analogue dials behind the steering wheel with a high-resolution 12.3-inch screen. Using buttons on the steering wheel you can view sat-nav directions, monitor the car’s battery level and change which songs are playing through the stereo. It’s not just packed with tech, it’s pretty roomy, too. Head and legroom are generous in the front seats, and there’s plenty of storage space in the deep centre console and capacious door bins. There’s enough room in the back for six-foot adults to sit behind and equally tall driver and the almost flat rear floor means there’s more than enough room for three passengers to put their feet. Boot space is pretty good, too. You can carry 600 litres of luggage with the back seats in place and a whopping 1,725 litres with them folded flat. There isn’t a particularly large lip to lift heavy items over and you get enough underfloor storage for a few extra soft bags. You don’t have to worry about finding space for a charging cable, either. There’s a dedicated storage bin under the bonnet for the e-tron’s portable 11kw charging box – along with an extra 60 litres of storage for small bags.

The Audi e-tron might not be quite as quick as an entry-level Tesla Model X, but it’s no slouch, 0-62mph takes 5.7 seconds – quicker than a Honda Civic Type R – and it has a top speed of 124mph. It’s twin electric motors produce a combined output of 355hp but in the car’s sportiest ‘S’ power delivery that increases to 402hp for a maximum of eight seconds if you stamp on the accelerator. That should make it ideal for motorway overtakes.

Speaking of motorways, the e-tron is designed to do much longer journeys than just popping to the shops – with the batteries brimmed, it has a range of around 250 miles. A full charge (using the standard 11kw charger) takes around 8.5 hours, but you can cut this time down to less than 4.5 hours by using the optional 22kw charging unit. The fastest way to top up the e-tron’s batteries, however, is to use a 150kw public fast-charging point. One of these will boost the battery charge by as much as 80 per cent in just half an hour.

The e-tron’s four-wheel drive system may be called quattro – just like every system since it was originally conceived in the 1976 Audi Quattro rally car – but it’s completely different to any of the quattro drivetrains that precede it. That’s because the e-tron has two electric motors – one each for the front and rear axle – that make it four-wheel drive, rather than a traditional petrol or diesel engine that has its power split between the front and back wheels via mechanical differentials. In layman’s terms – the terminology we feel most qualified in – that means the e-tron’s system can react to changing conditions in a blink of an eye or in 30 milliseconds, to be precise. In normal driving conditions, for example, the e-tron only powers its back wheels, but exiting a corner with your foot down will see the front wheels’ motor leap into action to pull the car out of bends. According to Audi, the system really comes into its own on snow and ice where its ability to modulate power quickly and precisely gives you more grip than is possible in a petrol or diesel four-wheel-drive. While the way the e-tron’s quattro system work is all new, the way you control it is, reassuringly, exactly the same as you would in any other Audi – you simply pick from a number of presets on the Audi Drive Select controller. You get no less than seven of those modes to choose from – Auto, Comfort, Dynamic, Efficiency, Individual, Allroad and Offroad. They do a number of different things from conserving electricity (Efficiency) to giving you as much performance as possible and to hell with the battery (Dynamic).

Along with its clever four-wheel drive, the Audi e-tron electric SUV comes with five-link suspension front and rear that means the car should be comfortable on bumpy roads but also planted in bends. An air suspension system comes as standard and is controlled using the car’s drive select. It can vary the e-tron’s ride height by up to 76mm depending on road conditions – on the motorway it can lower the e-tron to aid stability. Off-road, it’ll do the opposite raising the suspension to give it extra clearance over rough terrain. It combines with damper control which can stiffen or soften the individual dampers on each wheel to make the car feel more agile in bends or softer and more compliant on bumpy roads, respectively.

The Audi e-tron electric SUV’s upright body means it looks like an off-roader, but it actually has the low centre of gravity to match a normal car like an Audi A4 saloon. That’s because of the car’s 700kg, underfloor battery pack, which sits in between the front and rear wheels and is bolted to the body at 35 separate points. The e-tron is also, Audi says, 45 percent more rigid than a conventional SUV thanks to 17 percent of it being made from ultra-high strength steel. Another 40 percent, meanwhile, – including its roof, doors, bonnet and boot lid – are made from lightweight aluminium.

The Audi e-tron electric SUV comes as standard with progressive steering that makes it more direct at speed but also more manoeuvrable in town. Grip should be plentiful at whatever speed you’re going at because the e-tron comes with big 19-inch alloy wheels as standard, although you have the option to upgrade to 20 or 21-inch items if you so desire. The brakes, meanwhile, have 18-inch discs and operate via drive-by-wire – there’s no physical link between the pedal and the brakes themselves – that helps lower braking distances by up to 20 percent. Bookmark this page our subscribe to the carwow newsletter at the top of your screen to read a full review of the Audi e-tron as soon as we have it.