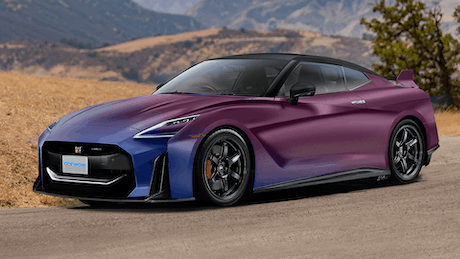 Is the Nissan GT-R set to return as a hybrid sports car? That looks to be the case, with exclusive new renderings previewing how it may look.

There’s no indication of when the R36 GT-R could appear, but this long-time rival to the Porsche 911 Turbo is surely on the horizon.

It’s safe to assume the Nissan GT-R R36 will continue on as a physics-defying brick of performance. With that in mind, these renders showcase how it may look.

Expect the blocky size and proportions of the R35 to return. There may even be some inspiration from the limited-edition Italdesign Nissan GT-R 50 — which you’ll see influence from in these images. Particularly in the roof, which may borrow the Italdesign’s two-tone appearance.

Being a GT-R, you can be sure the iconic quad taillights will return. Rather than take on simple circles though, a more modern complex rounded shape may appear.

However, with emissions regulations in mind, Nissan is likely to pursue using electrification to take performance further.

It’s possible it could use a single motor from the Nissan Ariya EV SUV. Combined with the V6, you’re looking at the potential for over 800hp.

Expect some sublime 0-60mph time if that’s the case — possibly below two seconds — with the possibility of a top speed comfortably over 200mph.

With hybrid assistance, the R36 GT-R may even drop the R35’s clever but extremely complicated all-wheel-drive system. Rather, it could use one that has the engine driving the rear wheels and the electric motor powering the front exclusively.

There’s no indication that the Nissan GT-R R36 is close to being ready for sale. With the R35 still going strong, it could be a few years away still.

However, when it does arrive, expect it to cost significantly more than the current car. Perhaps somewhere around £150,000 to account for all the new tech.

However, that’d still put it squarely alongside the Porsche 911 Turbo in sheer cost. Plus, with the McLaren Artura costing £180,000 and the Ferrari 296 GTB at £230,000, it’d still offer relatively bargain performance.

Looking for a new sports car? Check out the latest available through carwow