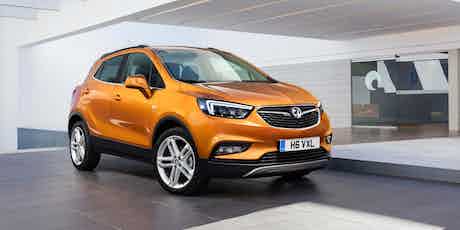 Vauxhall has revealed the first images and specs of the new Mokka X ahead of its public debut at this year’s Geneva Motor Show. A heavily revised version of the current model, the ‘X’ now denotes a crossover or SUV model in the brand’s range, which will soon follow on other upcoming models. The Mokka X can consider the Skoda Yeti as its closest rival, but the marginally smaller Nissan Juke and Citroen C4 Cactus fall into a similar group.

The main changes on the design front are found in the Mokka X’s face. A complete redesign features headlights that appear smaller and more square than before, a reshaped grille with less chrome and new front bumper design. The side view remains much the same, while at the rear a subtly reprofiled rear bumper and LED tail lights freshen things up. Two new colours are also available: Amber Orange (as shown in these images) and Lava Red.

When we drove the old car back in early 2015, we criticised the dash for its cluttered appearance and overwhelming number of buttons. The Mokka X has addressed this with a handsome new design heavily inspired by the latest Astra. The centre console is now dominated by a large touchscreen infotainment system (measuring seven or eight inches, depending on spec) and the vast reduction in the number of buttons allowed by the new set up helps to give the cabin a more contemporary appearance. The dials have also been redesigned to be easier to read, though unfortunately it appears the rather irritating handbrake design (with the release button bafflingly mounted on top of the lever) remains.

Overall, the suspension and chassis setup of the new Mokka is largely similar to the outgoing car, with the exception of a new and improved four-wheel drive system. In normal driving, all of the engine’s power is sent exclusively to the front wheels for efficiency, but when conditions become more slippery, up to 50 per cent of drive can be sent to the back axle to improve traction.

Like the interior, a new petrol motor beneath the Mokka’s bonnet is borrowed from the Astra. The 1.4-litre turbo unit produces 150hp, and when paired with a six-speed manual gearbox – and aided by start/stop technology – the new unit is claimed to achieve 42.8mpg. The 1.6-litre “Whisper” diesel remains from the outgoing car, which even in somewhat unfavourable conditions managed a respectable 53.2mpg in our hands.

One of the key features introduced for the latest Mokka is OnStar. The online-enabled safety system is linked to an advisor 24/7. In the event of an airbag deployment, the advisor will contact the driver to enquire whether or not any help is required, and can alert the emergency services if necessary. A further benefit of OnStar is it means that the Mokka is now effectively a 4G Wi-Fi hotspot, allowing up to seven wireless devices to be connected simultaneously. Furthermore, the new infotainment system allows compatibility with both Apple CarPlay and Android apps. The redesigned headlight clusters now house full-LED adaptive lights. The adaptive tech means that the Mokka’s lights can ‘look’ through corners in harmony with the angle of the steering wheel, and their direction can be altered for driving abroad by a simple settings change.

Deliveries for the new Mokka X are set to commence in late 2016. Entry level models with a 1.6-litre petrol engine and a manual gearbox will cost £17,590, while top of the range Elite Nav versions with a diesel engine will set you back £26,765. Automatic models cost approximately £800 more across the range than their manual counterparts.