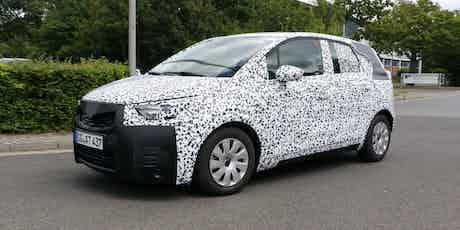 The new Vauxhall Meriva has been spotted completing on-road testing in images courtesy of Top Speed. These pictures give us another glimpse at the upcoming mini-MPV’s chunky new SUV styling ahead of its 2017 release. Read on for full details and pictures of the new Meriva in action…

The new Meriva will step away from the boxy mini-MPV style of its predecessor and lean more towards the curvier, more rugged look of a crossover. Recent spy shots show off the new car’s new grille, slimmer headlights and totally redesigned rear end.

Bulky cladding covers up some of the prototype’s body panels but we can see the new car will feature new brakelights, an angular C-pillar – like the Astra hatchback – and a slightly raised ride height, too.

The new car’s larger dimensions and more SUV-like appearance will grant the new car greater interior and boot space as well as improved headroom and legroom for passengers. Unlike the outgoing model, access to the rear seats will be through conventional, rather than rear-hinged, doors. Compare it to the current Vauxhall Meriva interior here.

Elements from the Astra and Mokka X interiors will probably make their way to the new Meriva and its cabin is expected to boast the firm’s latest infotainment system. Built-in WiFi and Vauxhall’s OnStar personal assistant system should be offered on mid-range trim levels.

The new Meriva, Zafira and a larger SUV will join a 27-model Vauxhall lineup in the next few years – powered by a selection of 17 new engines. It’s unlikely the Meriva will benefit from these, however, and will most likely come with updated versions of the outgoing model’s 1.4-litre petrol and 1.6-litre diesel units. The Meriva driving experience is likely to be comfortable and frugal.

The new Meriva is expected to cost slightly more than the outgoing model across the range when it goes on sale in 2017. Entry-level versions could cost approximately £15,000 while range-topping cars could set you back close to £25,000.

An all-new Vauxhall Meriva will be with us soon and reports suggest the model will head in a different direction from the outgoing car. With traditional MPV vehicles far less desirable than they once were among buyers, the Meriva is likely to take on a more SUV-inspired style this time around.

Like the latest Mokka, the new car is likely to bear an ‘X’ designation, to single it out as one of the SUV-inspired models within the range.

Early spy shots of the Meriva – courtesy of autoevolution – have shown cars wearing heavy disguises to prevent styling details revealing themselves before the car’s official launch. However, thanks to the popularity of crossovers and SUVs, we can consider it almost a given that the new model will sport a broader stance, larger alloy wheels and chunkier design details.

The old car granted passengers access to the back seats via a pair of rear-hinged doors. These will be dropped for more conventional items on its replacement. The new car will grow slightly from the current model, moving its dimensions slightly further beyond those of the Mokka X, which currently measures only 22mm shorter than the Meriva.

While we’re yet to see inside the upcoming Meriva, we expect it to draw plenty of inspiration from the latest Astra and Mokka X. A new infotainment screen will house functions for built-in Wi-Fi and OnStar, while the button count will be vastly slimmed down from the cluttered appearance of the existing model.

The new Meriva is the first Vauxhall product to be co-developed with PSA (the Peugeot/Citroen group) after the companies agreed a technical partnership in 2012. This means that it should be built on an all-new platform, which will also see service in both of the French brands’ lineups soon. With base models of the current Meriva weighing in at a hefty 1,300kg, it’s likely that the new chassis will be significantly lighter, boosting performance, handling and fuel efficiency.

The current Meriva is offered with a choice of a 1.4-litre petrol in three different power outputs, and the firm’s 1.6-litre ‘Whisper’ diesel, producing between 94 and 134hp. Beyond minor power and efficiency revisions to these units, it’s unlikely much else will change under the bonnet.

The Vauxhall Meriva is currently priced from £12,995, with prices rising to just less than £22,000 for the top-end trim levels. The increase in size might see a slight increase to those figures, but pricing will need to remain competitive in order to compete against the likes of the Ford B-Max.

An official release date is yet to be confirmed, but we expect the new model to hit showrooms in 2017.