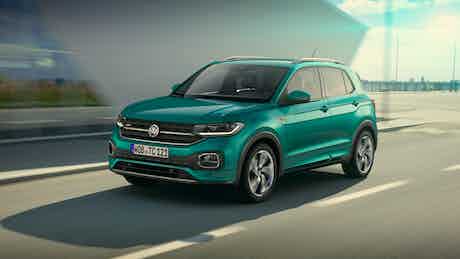 The new Volkswagen T-Cross – the smallest SUV in the manufacturer’s range – has been revealed in full. It’s an alternative to models like the Kia Stonic, Citroen C4 Cactus and the SEAT Arona. Read our full Volkswagen T-Cross review.

The Volkswagen T-Cross is based on the Volkswagen Polo, but you wouldn’t know that from looking at it. Compared with the Polo, the T-Cross is much taller and has a bluff front end that makes it significantly more imposing. Around the side you get alloy wheels up to 17-inches in size and the VW T-Cross has squared off wheel arches that make it look more chunky. Around the back is where you’ll spot the T-Cross’s most distinctive feature, though – a wraparound light bar that stretches across the backside of the car and comes with LED brake lights as standard. ‘Personalisation’ is a buzzword for a car like this and the VW T-Cross will be available with a choice of 12 paint finishes and a variety of wheel colours. Most models will also be available with a design pack featuring contrasting paint finishes for the door mirrors and wheels, while inside you get a sports steering wheel and a two-tone design for the upholstery and dashboard plastics. Sportier R-Line models – just like the one shown here – get a body kit, bigger wheels and subtle interior tweaks.

The Volkswagen T-Cross will be offered with a variety of interior colours that’ll make it feel more youthful than some larger VWs. That said, it’ll be available with the same technology fitted to the firm’s other cars. As a result, while the T-Cross comes fitted as standard with a 6.5-inch sat-nav screen, you’ll be able to upgrade it to an eight-inch screen that’ll come in combination with an Active Info Display that replaces the conventional dials behind the steering wheel with a high-resolution digital display. In total, you can have your T-Cross fitted with up to four USB plugs and a wireless charging dock, while a 300W eight-speaker Beats stereo – complete with a boot-mounted subwoofer – is also on the options list.

The Volkswagen T-Cross is longer and taller than the Polo that it is based upon and that means it’s more practical in all areas. Upfront you and your tall passengers will have more head and legroom than in a Polo. The same will also be true in the back where, along with having more room, you also get more adjustability courtesy of a back seat that can recline as well as sliding forward and backwards by up to 14cm. Depending on where you set the seats, the T-Cross has a boot capacity of 385 to 455 litres – that’s more than you get in the larger Volkswagen Golf. And, with the back seats folded away, the T-Cross becomes comparable to a small van with a 1,281-litre total capacity and a front passenger seat that can (optionally) fold forwards flat for carrying longer luggage. Loading heavy items shouldn’t be too tricky, either, thanks to the T-Cross’ wide boot opening and adjustable boot floor that can be raised to form a completely flat load bay. There isn’t quite enough space to store the parcel shelf under the boot floor, but in versions without a spare wheel you get plenty of room to hide away a few large soft bags.

The Volkswagen T-Cross will be available in three trim levels. Basic models are, well, pretty basic – they come with a 6.5-inch infotainment screen, a height adjustable driver’s seat, four electric windows and not a lot else as standard. To get a car with the equipment you actually need, like air-conditioning and alloy wheels, then you’ll need to upgrade to the VW T-Cross Life, which also comes with all-round parking sensors. Style models, meanwhile, sit at the top-of-the-range and add powerful LED headlights, ambient lighting, sports seats and larger 17-inch alloy wheels. Options worth considering will include things like keyless entry and auto-dipping headlights.

Safety kit is solid no matter which version of the T-Cross you go for. All models come with automatic emergency braking, lane-keep assist – that can gently steer the car in lane – and a blind-spot warning system that warns you of cars approaching from behind. You can bolster the car’s safety still further by upgrading to active cruise control – that can brake and accelerate the car independently on the motorway – and auto park, which can squeeze the T-Cross into tight spaces perfectly, while you only operate the brake and accelerator.

The Volkswagen T-Cross shares all of its engines with the VW Polo. Exact fuel economy figures have yet to be revealed, but you can be sure that all models will be cheap to run. The range kicks off with the 95hp 1.0-litre petrol, which should be frugal, but will also feel pretty slow – it gets from 0-62mph in 11.5 seconds. It’s the only petrol model that comes with a five-speed manual gearbox as standard, which’ll make it quite noisy on the motorway and a little more thirsty on fuel than it needs to be, too. A safer bet is the 115hp 1.0-litre petrol. Its extra power will make it noticeably nippier than the 95hp T-Cross (it hits 0-62mph from rest in 9.9 seconds) and it gets a six-speed manual gearbox as standard, which will make it quieter at speed and also better on fuel when cruising. If you like, you can also have it with a seven-speed automatic. The 150hp 1.5-litre petrol gets the same automatic gearbox as standard and is the quickest model of all, with the 0-62mph sprint taking a very respectable 7.8 seconds. It shouldn’t even cost that much more to run because its clever engine can turn off half its cylinders to save fuel when the extra power they produce isn’t needed. Finally, there’s the 95hp 1.6-litre diesel which will have the cheapest running costs in the range but will only be worth going for if you regularly do plenty of long motorway journeys.

The Volkswagen T-Cross’ order books will open in early 2019, but you won’t start to see models in showrooms until around April that same year. VW hasn’t confirmed exactly how much it’ll cost, but you can expect entry-level cars to set you back in the region of £17,000. Bookmark this page to read a full review of the Volkswagen T-Cross when we have it.