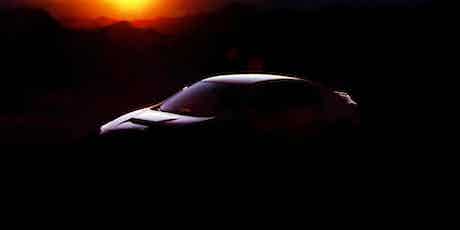 Subaru has just released its first teaser image of its upcoming turbocharged WRX. This highly anticipated model is expected to debut soon. Read on for all you need to know so far.

A new Subaru WRX is cause for excitement, especially since most rally-inspired performance saloons (such as the Mitsubishi Evolution) have disappeared from showrooms. Subaru has revealed a new teaser image showing the new car before it’s officially revealed later in 2021 or in 2022.

The lines on the teaser pic are instantly recognisable as one of Subaru’s hotter turbocharged WRX models. The trademark bonnet scoop is still evident and you can just make out a set of boxy wheel arches and a small lip spoiler on the bootlid.

It’s possible the new WRX will take inspiration from the Subaru Viziv concept from 2017. Don’t expect the concept’s vast alloy wheels to reach production unchanged, but elements of the Viziv’s bumpers and headlight design could find homes on the new WRX.

Nothing has been officially revealed of the interior just yet, but you can expect a variation of Subaru’s latest cabin design, such as the one in the new Subaru Outback (shown above.)

That means the WRX will probably get a large portrait 11.6-inch infotainment screen and, possibly, a configurable digital driver display. The usual supportive WRX sports seats and red trim accents should help the new car’s interior stand out from the cabins in Subaru’s less sporty models.

No figures have been revealed just yet, but you should see at least 260hp for the WRX to stay competitive with the current crop of turbocharged four-cylinder hatches and saloons (such as those in the video above.) A manual gearbox and all-wheel drive should be standard and a more powerful WRX STI model is expected as well.

No official pricing has been announced yet, although if the WRX does make it to the UK it could cost from around £35,000. This would make it an interesting alternative to the £33,525 VW Golf GTI and £34,415 Honda Civic Type R. The Subaru WRX is expected to officially debut later in 2021.

Can’t wait for this new Subaru to go on sale? Check out the top 10 hot hatches on sale for a selection of great performance all-rounders.