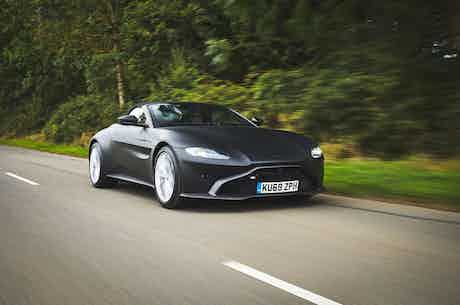 Aston Martin has revealed pictures of its all-new Vantage Roadster – the drop-top version of the firm’s super-coupe.

It gets a fabric roof that’s lighter than the folding metal hardtops you get with the likes of the Mercedes SL.

It’s also more compact meaning that Aston Martin hasn’t had to compromise the Vantage’s drop-dead-gorgeous looks in the pursuit of wind-in-your-hair thrills – in fact, if anything, it looks even better, with the smaller roof helping it look planted to the road.

Elsewhere, it’s business as usual, which means you get a front splitter that looks like a rugby player’s gum guard, feline lines down the car’s flanks and an LED light strip that follows the contours of the car’s rear end and boot.

The added weight of the roof mechanism and chassis bolstering designed to make up for the lack of rigidity will likely add around 100kgs if you put the new car on the scales but performance will still be comparable to the coupe with 0-62mph coming up in less than four seconds and plus-190mph possible flat out.