Facelifted BMW i3 and i3s price, specs and release date 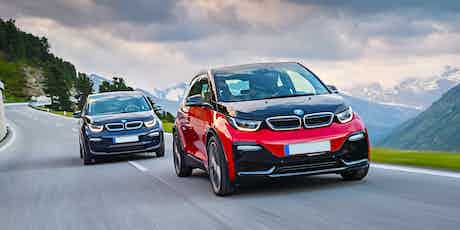 BMW has revealed updates for the i3 electric car, including a new, faster i3s version with an extra 14hp

BMW has updated its i3 electric car with enhanced styling, new colour options and new LED lights at both ends. The Bavarian brand has also released a sportier i3s model with slightly more power and better suspension to make the most of the electric motor’s instant thrust. The new model will be released in August priced from £34,070.

The i3’s styling changes are mainly superficial – the i3’s deliberately futuristic design remains one of the biggest reasons buyers like it. Cosmetic changes to the new model include slightly tweaked headlights with LED lights, new bumpers with more prominent air intakes and chrome trim above the windows and on the bootlid.

The i3s – shown here in red – has the option of a bright, two-tone colour scheme and an aggressive-looking front bumper to emphasise its sporty pretensions. A 10mm lower ride height will aid handling but also help the i3s look more poised on the move.

BMW has resisted the chance to fiddle with the i3’s interior so it’s pretty much the same as the outgoing model. The display screens will have better graphics and there’s a wider range of interior materials and colours, but very little else has changed including the option to have the cabin trimmed in eco-friendly materials such as recycled plastic and plant fibre.

The i3’s interior is designed to look minimalistic to continue the futuristic feel. Conventional dials are replaced by a slim screen showing range and driving information, while the cabin feels light and airy thanks to the lack of centre console, big windows and a high roofline.

With 170hp on tap and all of it available from standstill, the i3 is a seriously zippy car. It takes 7.3 seconds to get from 0-62mph, which is on a par with some hot hatchbacks, and has a claimed maximum range of 186 miles – although 125 miles is what you can expect to get in real-world driving. The i3s gets an extra 14hp, bringing the 0-62mph time down to 6.9 seconds and increasing the top speed to 99mph, with no change in range – it also gets sports suspension and a lowered ride height.

Both models are available with a tiny, range-extending petrol engine to reduce fears about running out of battery power. The 38hp two-cylinder petrol engine sits below the boot floor and increases the range up to 205 miles – although we’d avoid the extra cost and complexity if you can help it and stick with the conventional battery-only version.