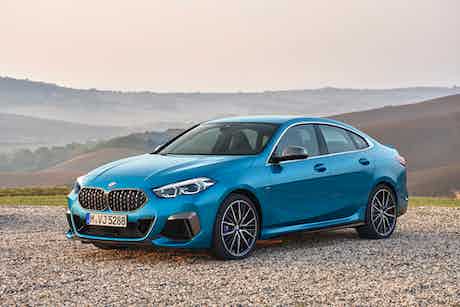 BMW has revealed full details on the 2 Series Gran Coupe. Read on for everything you need to know.

The launch of the BMW 2 Series Gran Coupe means that if you’re in the market for a small four-door coupe you do now, finally, have an alternative to the Mercedes CLA.

In fact, the BMW follows almost exactly the same formula as its Mercedes counterpart – it’s based on the BMW 1 Series (the Merc is based on the A-Class), but has a coupe-style roofline and cool pillarless doors. Those are the most noticeable changes over the 1 Series, though the Gran Coupe’s front had also been tweaked with an altered grille while at the back it gets longer, slimmer tails lights than the hatchback.

Alloy wheels are 17-inches in size on SE models while M Sport and M235i cars get 18-inch alloys as standard with the option to upgrade to 19-inch rims.

It’s not just the pair of rear doors that make the GC more practical than the standard 2-door coupe, when you get inside you’ll also notice you have more space. In fact, legroom has increased by 33mm compared to the two-door model and even if you option the space-eating glass roof, you get 14mm more headroom. The boot has also increased in size to 430 litres – 40 litres bigger than the two-door coupe.

Infotainment is another area that’s improved compared to the older two-door model, the Gran Coupe gets BMW Live Cockpit Plus as standard which includes a 9-inch central touchscreen and a 5-inch display in the instrument binnacle. It has a touch control system in between the two front seats, two USB ports and WiFi. The system can give real-time updates on things like parking availability. That said, you only get Apple CarPlay (no Android Auto) and only for a year’s subscription.

Want to level up? Then you’ll want the optional BMW Live Cockpit Professional, which is standard on M Sport and M235i models. The upgraded system has a 10-inch central display and a 10-inch screen in place of analogue instruments. The top-of-the-range infotainment also includes a voice activation system that responds to the words ‘hey BMW’. Say ‘hey BMW, I’m cold’ and it’ll turn up the heater but it can also respond to questions such as ‘how does the high-beam assist work’. The system can even access your calendar to avoid congestion on the way to and find a parking space on arrival at your next appointment.

The BMW 2 Series Gran Coupe is available with three engines from launch – two petrol and one diesel.

The range kicks off with the 218i petrol, the only three-cylinder model its 1.5-litre engine produces 140hp. That’s enough to get the 2 Series Gran Coupe from 0-62mph in 8.7 seconds, so it’ll feel nippy in town but not that quick out of it – despite a 136mph top speed. The upside of its so-so performance is impressive fuel economy of 55mpg.

To get better miles to the gallon you’ll have to go for the 220d diesel, which comes with an eight-speed automatic gearbox as standard. Its 2.0-litre four-cylinder engine produces 190hp, gets the GC from 0-62mph in 7.5 seconds and hits 146mph flat out. Most impressive is that it can also return fuel economy of 67mpg.

At the other end of the scale is the top-of-the-range petrol – the 306hp M235i. Its 2.0-litre four-cylinder engine gets it from 0-60mph in just 4.9 seconds, with the help of xDrive four-wheel drive and an eight-speed automatic gearbox. It’s limited to 155mph.

Even the bone-stock 1 Series should be fun to drive, though. All models get a traction control system that was originally developed in the BMW i3 electric car. It’s wired directly to the engine, working 10 times quicker than a traditional system to reduce understeer when you power out of a corner.

BMW Performance Control, meanwhile, is also standard. It trims your line into corners by applying the brakes to the inside wheels to cut understeer and make the car feel more agile.

The M235i, meanwhile, adds to this with sports suspension, uprated brakes and also gets a limited-slip differential upfront so the car’s leading tyres can grip into corners like they have claws. The optional adjustable dampers, meanwhile, have softer more comfortable, or tauter sportier settings for the suspension.

The 2 Series GC is also available with most of the options you can have with larger BMWs. Want to fill the interior with natural light? Then you’ll want the optional glass roof which is 0.7m2 in size and includes a blind and a wind deflector.

Fancy pretending you’re a fighter pilot? Then you’ll need the nine-inch head-up display which projects information such as directions and speed onto the windscreen and straight into your eye line.

Finally, you can upgrade the standard six-speaker 100W stereo for a 16-speaker, 464W Harman Kardon system.

The BMW 2 Series Gran Coupe starts from around £28,000 which buys your an entry-level 218i with a six-speed manual gearbox. The 220d diesel is next in line at £31,500 while the top-of-the-range M235i xDrive goes past £38,000 with options. The 2 Series GCs on sale now with first deliveries expected in March next year.