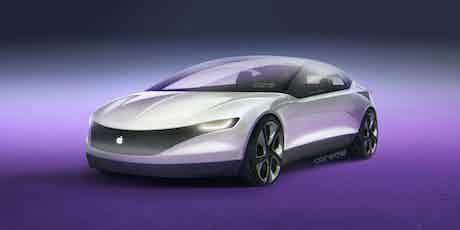 After Hyundai appeared to confirm it was involved in talks with Apple about building the tech giant’s first car, new statements suggest the partnership will go no further. Read on for full details.

Apple is planning to launch its own electric car, which is expected to be a high-tech alternative to the likes of the Tesla Model 3, S, X and Y. It could feature game-changing autonomous driving features when it arrives in the mid 2020s.

A recent statement issued by Hyundai to the Financial Times appeared to confirm that the South Korean carmaker was in talks with the US technology giant that could have lead to Hyundai and Kia taking a role in building the upcoming Apple car.

A Hyundai spokesperson said “Apple and Hyundai are in discussions, but as it is at an early stage, nothing has been decided”. The discussions in question refer to the development of autonomous electric vehicles. However, Hyundai later went on to amend its statement and said that Apple was talking with a variety of global carmakers and that Hyundai has received ‘requests for potential co-operation from various companies’.

A subsequent statement from Hyundai reported that the Korean carmaker may have had concerns regarding Apple’s intention to source parts for the new car from multiple suppliers and have Hyundai and Kia assemble them into a finished product.

Since then, both Hyundai and Kia have issued statements confirming that talks with Apple regarding the building of a new electric car have ended. That’s not to say the Apple car project has been put to bed. Apple has recently hired a former chassis engineer from Porsche and rumours suggest the tech firm could be in talks with General Motors and Stellantis (the group that owns the Fiat, Chrysler, Citroen, Peugeot, and Alfa Romeo brands, among others) about building the new car.

Don’t think you’ll be able to put your name down for an Apple car this year, though. Developing a new car, especially one featuring advanced battery technology and autonomous driving features, takes a long time. And, as the failed Dyson electric car project shows, it’s even more difficult if your company has never built a car before…

If Apple stays the course, you could see its first car in showrooms in around five years’ time. As with most Apple products, however, it’s likely to carry a premium over alternatives, so it’ll almost certainly cost more than a comparable electric car from Tesla, Mercedes, BMW or Audi.