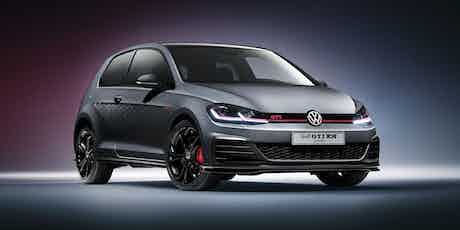 Volkswagen has revealed the race-inspired Volkswagen Golf GTI TCR (which stands for Touring Car Racing) concept at a Volkswagen festival in Austria. It’s tipped to preview a new hardcore version of the GTI, which is expected to go on sale in the next 12 months. Before this high-performance model goes on sale, see how much you can save on the standard (but still very speedy) VW Golf GTI. Click ‘login’ in the top-right-hand corner to sign in and configure a brand-new car, or browse our extensive range of pre-reg, ex-demo, new, nearly new and used in-stock cars.

To find out more about the 2019 VW Golf GTI TCR, read our review of it here.

The Golf GTI TCR takes its name from the TCR international motor-racing series – a championship contested by racing cars based on road-going models. As a result, the new model pumps out a whopping 290hp. That’s 60hp more than the GTI and only 20hp shy of the flagship Golf R.

Unlike the four-wheel drive R, in the TCR power is sent to the front wheels through a seven-speed DSG automatic gearbox and a limited-slip differential, which should help it sprint from 0-62mph in around six seconds flat compared to the standard GTI’s 6.4-second time. The TCR is limited to a 155mph top speed, but if that doesn’t sound fast enough you can pay extra to have the limit raised to 164mph. That makes it the fastest Golf you can buy, second only to the limited Clubsport S that topped out at 165mph. Also available on the TCR, if you’re feeling particularly flush, are an optional titanium exhaust for added zing that replaces the standard steel item, larger 19-inch alloy wheels and lowered suspension that can be adjusted between comfort and sport settings.

Thankfully, not everything in the TCR costs extra. It comes with more powerful brakes and remodelled front and rear bumpers to help channel air more efficiently around the car.

Inside, you get supportive sports seats with bright red trims that give a modern twist on the traditional tartan pattern you get in the standard GTI. This red theme continues on the dashboard, steering wheel, gear lever and doors, and even the seatbelts come with red stitching down each side.