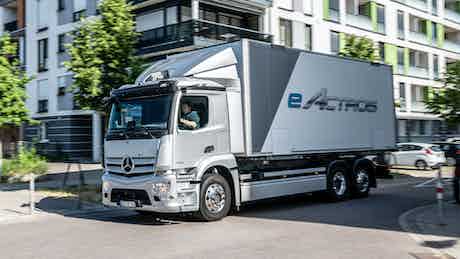 The Mercedes eActros electric HGV is the first-ever Mercedes EV truck and Mat takes this 540hp machine out on the roads – with a chaperone of course.

This may be Mercedes’ first electric truck, but – aside from the eActros badging – you would be hard-pressed to tell it apart from a diesel version. That’s not necessarily a bad thing as the standard Actros is pretty handsome (for a lorry, at least) with its low-mounted headlights and squared-off cab design.

Mercedes is aiming to seamlessly integrate these new EV trucks into existing diesel fleets, so it makes sense that it looks pretty much identical to an ordinary diesel-powered Mercedes truck. The eActros does feature digital side mirrors to help reduce drag, although this is also available on Mercedes’ diesel-powered lorries.

It might not be as plush as the interior of an S-Class, but the eActros has supremely comfortable seats, plenty of storage nooks and crannies and acres of space. It also has acres of hard-wearing plastics across the dashboard and doors – as you’d expect from a commercial vehicle.

Modern conveniences include a digital driver display, as well as an infotainment touchscreen angled towards the driver. Another massive portrait-oriented screen is mounted on the door frame pillar that plays a live video feed from the truck’s rear-facing cameras.

When it comes to visibility, the eActros offers a commanding view of the road ahead, although you will have to rely on the rearview camera (or Mat’s chaperone, Marcelle) to avoid bumping into things when reversing.

Trucks aren’t usually built for speed but the instant torque delivery of the eActros gives it strong acceleration. It’ll accelerate from 0-31mph in 11 – and that’s with a 25-tonne payload onboard.  It is also notably quieter than a diesel lorry, with just wind noise infiltrating the well-insulated cabin at its 50mph top speed.

The truck is powered by what Mercedes calls the ‘e-axle’. This consists of two electric motors mounted on the first rear axle, coupled to a two-speed gearbox. It produces 540hp and 970Nm of torque, while the 400kWh battery pack provides a range of up to 250 miles.

There is a 5-stage brake regeneration system that works the same as in a conventional electric car, converting energy back to the batteries whenever you apply the brakes.

The eActros can also be recharged from 20% to 80% capacity in just 1 hour on a 150kW fast charger. That should be plenty for transporting goods in towns and cities, with the long-haul duties left to traditional diesel trucks; which Mat found out can travel up to 3,750 miles when equipped with dual fuel tanks!

The smooth and silent power delivery coupled with zero emissions makes the eActros a great choice for transporting heavy goods in built-up areas, and it is as polished and impressive as you would expect from Mercedes. Even so, we’re not sure if Mat is ready to move from cars to truck testing just yet.

Not looking for a truck but fancy a practical electric car? Compare the top 10 best electric cars on sale or check out the latest new-car deals available through carwow.

Drag race: Mitsubishi Evo VI Vs Subaru Impreza P1
New BMW 3 Series revealed: prices and specs confirmed
How is the Russian invasion of Ukraine affecting the global car industry?
Peugeot Allure trim: What is it and is it worth it?
Drag race: Audi RS5 vs BMW i4 M50
Understeer vs oversteer: What’s the difference?
Lamborghini Aventador generations drag race
Pedestrian crossings in the UK explained
10 of the best drift cars
Volkswagen Passat vs Audi A4
Skoda Laurin & Klement (L&K) trim: what is it and is it worth it?
How long do electric car batteries last?
Types of speed camera in the UK
Drag race: Tesla Model 3 vs Lamborghini Urus
What is the Mini Chili Pack? Is it worth it?