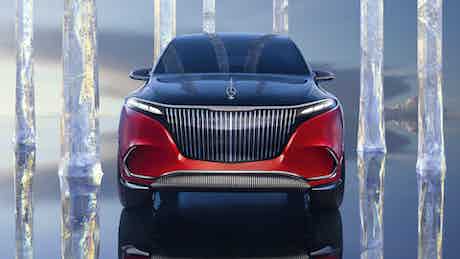 This is the Mercedes Maybach EQS SUV. It’s a concept car that shows you what the first-ever all-electric Maybach will look like when the finished road car is revealed in 2022.

This is the new Maybach EQS SUV. OK, so it’s only a concept for now, but it shows you what the first-ever fully-electric Maybach will be like when it goes on sale in 2023.

It’ll be the most luxurious electric car ever made, and here’s everything you need to know about it.

Say what you want about this new Maybach EQS SUV – it’s certainly imposing. Almost every body panel has some sort of chrome trim, from the widow surrounds to the bonnet, side skirt and doors. It’s everywhere – even on the vast 24-inch alloy wheels and hidden door handles.

Previous Maybach concepts have gone on to heavily inspire the design of later road cars, such as the catchily named Vision Ultimate Luxury concept (above) that inspired the Maybach GLS production car (below).

As a result, you can expect quite a few of this concept’s outlandish details to appear on the finished Maybach EQS.

Maybachs have traditionally about maximum back-seat luxury – and it looks like this new model is no different.

Even though this is an absolutely massive SUV, it only has 2 back seats. Between these are a pair of champagne glasses, a touchscreen and a vase – naturally. Instead of carpet, this SUV has faux-fur, and the blue and white interior is said to be inspired by yachting.

Like the new EQS saloon, the Maybach EQS has Mercedes’ latest Hyperscreen infotainment system. This means it has a massive seamless glass screen that stretches from one side of the dashboard to the other with three built-in displays.

Unlike in that car the Maybach has a flat oval-style steering wheel – much like what you might find in the cockpit of a private jet.

Mercedes hasn’t said much about this new electric car’s range. After all, it is just a concept for now… It has dropped a few details about the new EQS SUV platform though – and that’s what Maybach will use to build this new SUV.

Mercedes is aiming to get more than 370 miles of range out of that car. That’s about the same range as a top-spec BMW iX, but it’s about 100 miles less than you get from a long-range Mercedes EQS saloon.

That shouldn’t be too surprising, really. The EQS is the most aerodynamic production car ever, and the MUCH taller Maybach SUV um, isn’t…

When Mercedes builds an ultra-posh Maybach version of its cars, it doesn’t base it on an entry-level model with a dinky engine. Oh no – it starts with a top spec car with the biggest engine. After all, that’s why the Maybach GLS has a 558hp twin-turbo V8.

Anyway, you can bet that this new Maybach EQS SUV will follow the same recipe. So it’ll get the largest battery and the most powerful motors Mercedes has.

Although, Mercedes has also revealed its first fully electric AMG model – the EQS AMG 53. This has up to 761hp, which is the same as a top-spec Porsche Taycan Turbo S, and does 0-60mph in just 3.4 seconds.

So, maybe Mercedes could fit this car’s motors to the Maybach EQS SUV instead and build an ultra-luxurious electric SUV with even more oomph.

This new Maybach is only a concept car for now – so Mercedes hasn’t said anything about how much the finished car will cost.

And that’s before you’ve added any optional extras!

If you can’t wait for the EQS SUV to go on sale, check out the latest electric car offers or read more about the upcoming Mercedes EQS, EQE, EQB and EQA electric cars.