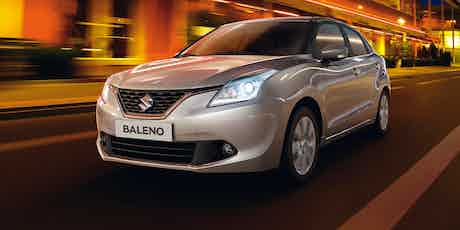 Suzuki has released full details on the brand new Baleno hatchback. Is it a credible alternative to rivals from Ford or Volkswagen?

Suzuki has revived the Baleno name for a brand new compact five-door hatchback, aiming to compete with the Ford Fiesta and Volkswagen Polo.

Although competing in a similar market as the existing five-door Swift, Suzuki is hoping the Baleno will be tempting for customers looking for greater practicality and more interior space.

If you’re after a practical runabout, why not take a look at our list of the ten most spacious family hatchbacks?

The new Baleno is something of a departure from the rest of the Suzuki range – neither smooth like the Swift nor blocky like the larger Vitara. It combines a conventional two-box hatchback form with clean and understated styling, free from fiddly details.

A continuous feature line runs from the front grille, over the wheelarches to the rear bumper and back. This helps to reduce the visual height of this slightly top-heavy design. The only embellishments you’ll find on the outside are a chrome stripe framing the side windows and a polished strake on the boot lid.

The interior is dominated by a large infotainment system with a seven-inch touchscreen mounted in the centre of the dashboard. The minimalist design features only a small cluster of buttons circled around the air conditioning controls and integrated circular display.

The new Baleno features Apple CarPlay smartphone integration and USB functionality allowing the driver to use maps, audio playback and phone apps through the infotainment system.

Suzuki will offer two petrol engines with the Baleno, a 1.0-litre turbocharged 3-cylinder and a 1.2-litre four-cylinder unit. There is the option of either a five-speed manual or a CVT automatic gearbox, but the latter is reserved for the larger 1.2-litre engine.

The smaller three-cylinder engine is an efficient choice – in the Baleno, it can return up to 62.7mpg and emit just 103g/km of CO2. For outright efficiency, the ‘mild hybrid’ 1.2-litre option is the one to go for. This uses a combined starter motor and generator, along with a compact battery pack, to assist the engine when accelerating and generate electricity when braking. In this configuration, the Baleno could emit as little as 93g/km of CO2, making it free to tax.

When the Suzuki Baleno goes on sale in May 2016, we expect it to come with a base price of £12,000, allowing it to compete with rivals from Ford, Volkswagen and Skoda.

Save money on your new hatchback

If you’re after a cheap family hatchback, our car configurator can help you get a great deal. If you’re not sure which car is right for you, our car chooser and deals pages are here to help.