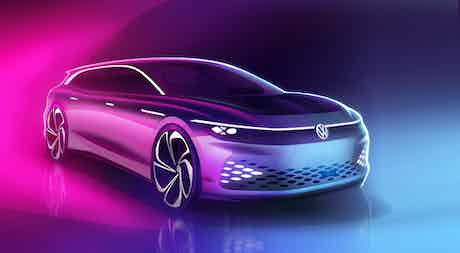 Volkswagen has revealed official sketches of the ID. Space Vizzion – the seventh member of its electric-only ID cars, here’s everything you need to know.

The ID.Space Vizzion brings something different to the party thanks to its sporty estate body shape – which should allow those stylish looks to be backed up by usable practicality. What it also allows for is a highly slippery shape, helping the new EV to offer a range of up to 300 miles between charges.

Underneath, it uses the same MEB underpinnings as Volkswagen’s other ID cars. As a result, you can expect the ID. Space Vizzion to have space for four adults while that elongated boot should offer more than the (up to) 541-litre capacity you get in the Volkswagen ID.3.

Interior specs should follow what we have seen in other ID cars, so you’ll get large infotainment screens, voice activation and interior lighting that communicates exactly what the car is up to in a way that’s naturally intuitive. And it wouldn’t be a proper planet-saving EV if it didn’t come decked out in vegan-friendly cabin upholstery – in the case of the Space Vizzion, it’s AppleSkin™ a leather-like material that’s a byproduct of apple juice production.

Volkswagen calls the ID Space Vizzion ‘a study for the future, but not a dream’, as a result, you can expect to see a production version in showrooms by 2021.