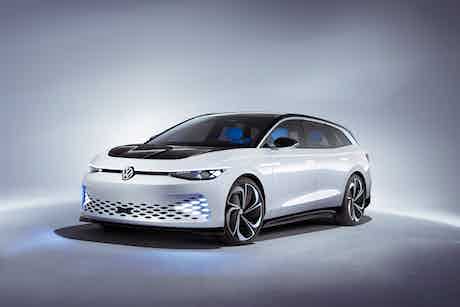 This is the Volkswagen ID. Space Vizzion – a roomy estate that’s the seventh model in VW’s all-electric lineup. Here’s everything you need to know…

It looks like an estate car, but according to VW the Space Vizzion which was unveiled at the LA motor show today combines the “aerodynamic properties of a Gran Turismo with the spacious proportions of an SUV”.

The Space Vizzion shares styling cues with VW’s other ID. electric models – most notably the ID.3, which gets the same flush nose, illuminated badge and Matrix LEDs, stepped body kink above the back wheels and intricate LED rear lights. But where the ID.3 has a functional shape – designed to squeeze as much passenger space as possible out of the car’s modest dimensions – the Vizzion has designed to be more visually appealing.

You get a long, GT-car style bonnet (needed to accommodate the front electric motor) and a sweeping roofline with painted bodywork that hides the car’s boxier true silhouette.

Get up close and you’ll spot the car’s aerodynamic package goes further than the customary blanked off grille you get with most EVs. A massive vent between the car’s LED headlights sends air over the low bonnet, along the windscreen and out through a roof spoiler at the back of the car. Air can pass above and below the spoiler – reducing turbulence and increasing aerodynamic efficiency in tandem with the rear diffuser on the underside of the car. Those flush-fitting door handles and the five-spoke 22-inch alloy wheels are also designed to help the car cut through the air with as little disturbance as possible.

Like the ID.3, the Space Vizzion has lighting effects that are designed to give the car a relatable personality. Unlock it, and digital effects make the car’s headlights open like eyes and you’ll get a similar awakening effect at the back of the car. At the same time, honeycomb style LEDs on the front bumper, head and tail lights animate the effect of the air passing through the car.

Jump inside the ID. Space Vizzion and you’ll find the interior theme centres around sustainability. As a result, those chrome highlights are just painted plastic, while the leather-look material that covers most of the interior, including the seats and inner doors, is AppleSkinTM, which is a byproduct from Apple juice production.

The VW ID.3 gets a new-age infotainment system to match its new-age interior. VW calls it an “all digital cockpit” that comprises of a multi-function steering wheel with touch-sensitive controls, an Augmented reality head-up display that can interact with the VW’s surroundings – for example making the sat-nav’s directions look like they’re hovering above the road. and – a small screen behind the steering wheel that takes the place of a conventional instrument binnacle.

The icing on the cake is a huge 16-inch central touchscreen similar to the one in the Tesla Model 3 that’ll be used to control the majority of the car’s systems. It includes a touch-sensitive strip that provides a quick way to turn up the stereo or the heater.

The latter forms part of VW’s smart climate system which understands voice commands like “fresh air’ and has intuitive buttons for things like “warm feet”.

The ID. Light, meanwhile, is a bit like the light-up infotainment bezel found in a Mini. A strip of light that runs the length of the dashboard, it changes colour to welcome you aboard, warn you when the motors are on and say ‘cheerio’ at the end of your trip. It can do everything from providing everything from navigation guidance to an emergency brake warning in a way that’s completely intuitive and not distracting.

The ID. Space Vizzion has the same underpinnings as every other ID. car. They’ve been developed specifically to package the cars electric motor/s and battery and their compact packaging means the Vizzion can offer the kind of interior space you’d expect from a car in the class above. While this show car has space for four, you can expect the production model to offer room for up to five people a big boot. It has a 586-litre capacity – or about the same as a VW Golf estate – which, as you can see, is enough space for a pair of electric longboard and two helmets, in case you wondered.

You’ll be able to have your ID. Space Vizzion either with two or four-wheel drive. The former uses a 205kW (279hp) motor mounted to the rear-wheels that is powered by a 82kWh battery mounted in the middle of the car, giving it a 50:50 weight distribution and a range of about 360 miles. The four-wheel-drive model adds a 75kWh motor – equivalent to 340hp – powering the front wheels.

The ID. Space Vizzion is could preview a production car that’ll go on sale in the next couple of years with a price tag of around £40,000. Keep tuned to the carwow news pages for the latest news on the car.