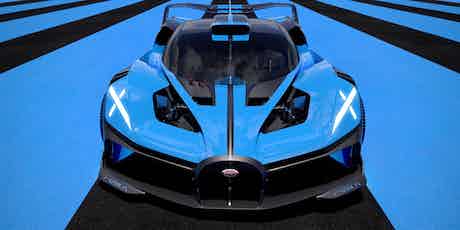 The new Bugatti Bolide is the firm’s most powerful, lightest and fastest car yet. But Bugatti hasn’t said whether it’ll go into production. Read on for full details.

This is the new Bugatti Bolide is Bugatti’s answer to the AMG Project One and Aston Martin Valkyrie. It’s named after the Italian word for a ‘meteor’ and the Latin for a ‘missile’. So, you can bet it’s going to be pretty rapid, then…

To make the Bolide, Bugatti took the mechanical bits from a Chiron and then shaved away as much of the bodywork as it could, which is why the new car looks more like a spaceship than ever. There’s exposed carbon fibre everywhere and you can even see bits of the front suspension through the bodywork.

There’s a huge roof scoop to feed air to the hungry W16 engine, and a massive fixed rear wing instead of the folding one you get on a Chiron (more on that later).

Arguably the Bolide’s best angle is from behind. Just check out those four vast exhaust pipes and the laser-thin brake lights. Bugatti says their ‘X’ shape was inspired by the Bell X-1 rocket plane – the first aircraft to break the sound barrier. All we can see is an X-Wing from Star Wars, though…

Besides those lights, there’s almost no bodywork at the back, so the massive slick rear tyres are visible on both sides. How much do you think Bugatti would charge for a set of mudflaps?

The new Bolide comes with the same 8-litre W16 engine as every other Bugatti, from the ‘entry level’ Chiron (if you can ever call a Chiron ‘entry level’) to the super-exclusive Centodieci. The Bolide’s W16 is even more special, though, because it cranks out a whopping 1,850 hp thanks to four new turbochargers.

Bugattis tend to be a bit heavy – after all, they do have a huge engine and a complicated four-wheel-drive system. Take the Divo for example. That car is a lighter version of the Chiron that’s designed to chase lap times rather than top speed records, but it still weighs almost 2 tonnes.

The Bolide has been put on an extreme diet, though, so it only weighs 1,240 kilograms. That’s 7 kilos lighter than a Toyota GT86, and that’s a tiny lightweight sportscar. This means each of the Bolide’s horsepower only has to push along two-thirds of a kilo each. That’s Formula 1 car territory.

Much of this weight-saving comes from 3D printed titanium parts, magnesium wheels and lightweight carbon-fibre bits for the driveshafts and suspension.

Bugatti hasn’t said exactly how fast the Bolide will be, but it has confirmed that its top speed will be ‘well above 500kmh’ – that’s more than 310mph in old money. This makes it faster than the Chiron Super Sport 300+, which could ‘only’ manage 304 mph.

Importantly, it means the new Bolide is also faster than the SSC Tuatara, which recently pinched the Chiron SS 300+’s top speed record by reportedly doing more than 330mph.

Top speed isn’t the only thing car makers brag about – they love comparing their cars’ lap times around race tracks, too. And, the new Bolide is shaping up to be one of the fastest cars ever around any race track. Bugatti says it’ll do a lap of the Le Mans track in 3 minutes 7 seconds – that’s faster than a purpose-built Le Mans racing car.

The Bolide doesn’t just look like a racing car on the outside, its interior is completely stripped-out, too. There’s loads of bare carbon fibre all over the place and the low-slung bucket seats get just a tiny bit of Alcantara padding.

There’s a racing steering wheel, too, and instead of an infotainment system you get a small screen on the steering column that’ll show tyre temperatures and lap times. Don’t bother asking if it has Apple CarPlay or Android Auto…

The new Bolide is absolutely covered in wings and spoilers to help produce as much downforce as possible. Bugatti says that at 200mph the front wing produces 800kg of downforce and the rear wing racks up 1,800kg. That means the 1,240kg Bolide could conceivably drive upside down in a tunnel.

That huge roof scoop also has an active aerodynamic surface that changes from smooth to bumpy at high speed. This sounds counter-intuitive, but it actually helps reduce the scoop’s drag by 10% and lift by 17%.

Bugatti hasn’t said whether it’ll put the Bolide into production, yet. However, you can bet there will be numerous billionaire petrolheads who’ll happily hand Bugatti a blank cheque to get their hands on one of these ultra-fast track cars. If it does go into production, expect the asking price to be in the region of £10,000,000. Ouch.

Check out the world’s fastest cars