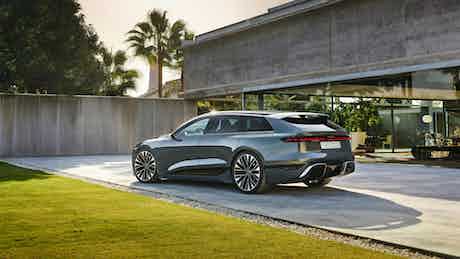 The new Audi A6 Avant e-Tron has been revealed. This electric estate is expected to go on sale in 2023, read on for all you need to know.

The new Audi A6 Avant e-tron has been revealed. It’s an estate version of the upcoming A6 e-tron saloon.

This alternative to the Porsche Taycan Sport Turismo is expected to share many of its electric components with the A6 e-tron concept, including its powerful 800V electrical system that’ll enable seriously fast charge times.

The new Audi A6 Avant e-Tron shares a lot of its design cues with the saloon, and this is no bad thing.

The front end is more or less the same as that you’ll find on the saloon. This means you get the blanked out grille and slim LED headlights that can be customised to show a variety of patterns.

These headlights are hiding a party trick as well, as they can be used to project video games onto walls at night. The A6 Avant e-Tron also gets projectors all around the car which can display messages and warnings on the ground for other road users.

It looks like a proper estate car from the side, unlike the current e-Tron concept which looks more like a four-door coupe. The Avant does have a sporty looking sloping roofline though, along with a large roof spoiler.

From the rear, the intricate LED light bar looks thoroughly modern. As does the huge rear diffuser which looks more like it belongs on a full-fat RS car than a practical electric estate.

The Audi A6 Avant e-Tron is going to share the same battery tech as the saloon, and it’s going to get the same choice of single- and dual-motor drive systems as well.

Under the floor sits a 100kWh battery that’ll give the car around 435-miles of range. It’ll also be capable of the same 270kW charging speeds as the saloon, meaning you can top up 186-miles of range in just 10 minutes.

Long-range models will use a single rear-mounted motor driving the rear wheels, while performance-focussed cars will get dual-motors and four-wheel drive.

Top-spec versions of the Audi A6 Avant e-Tron will have 476hp and 800Nm of torque. That’s the same as in the saloon and means it will accelerate from 0-60mph in less four seconds.

No images have emerged yet of the new Audi A6 Avant e-Tron’s cabin, and the same can be said of the saloon.

You can get a pretty good ideal of what the interior will look like by looking at Audi’s other electric models, such as the flagship Audi e-Tron GT and Q4 e-Tron. Both of these cars get minimalist designs with two large screens as standard.

The new Audi A6 e-Tron saloon is due to go on sale in 2023 alongside the normal A6, so the A6 e-Tron Avant should go on sale at the same time or slightly later.

As for price, the A6 e-Tron range is expected to undercut the flagship e-Tron GT by a few thousand pounds, but expect to have to fork out between £50,000 and £60,000 to get your hands on the Avant.

Looking for a hassle-free way to change your car? Head over to carwow and you can sell your old car and get a great price on a new one, all from the comfort of your own home. Tap the button below to get started today.