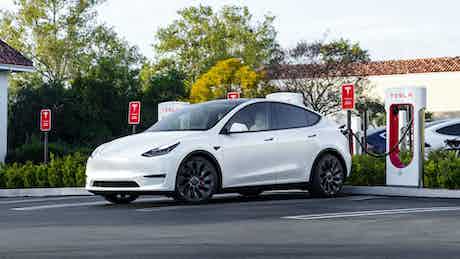 Supercharger network had previously been the preserve only of Teslas, but other makes of EV can now use the chargers in the UK

Tesla has announced other makes of EV can use its Supercharger network of public chargepoints in the UK. The move comes as part of a pilot scheme launched in Europe in November 2021, which is intended to lay the groundwork for all Superchargers being open to all makes of electric car.

A total of 158 Superchargers across 15 sites are part of the UK scheme, which will allow owners of all EVs, such as the Ford Mustang Mach-E, Hyundai Ioniq 5 and Polestar 2 to make use of rapid charging points that were once only accessible to Tesla’s Model 3, S, X and Y.

Charging a non-Tesla EV at a Supercharger won’t be that cheap, though: the firm says that while prices will vary from site to site, drivers will pay £0.60 per kWh.

That’s more than double the £0.26 paid by Tesla owners, even if it’s less than the £0.69 per kWh the Ionity network charges. Non-Tesla owners will be able to pay a monthly subscription of £10.99 for reduced pricing from the trial Superchargers, however.

There are roughly 900 Superchargers at 90 locations in the UK, and while the trial opens up a small proportion of these, it’s a big move given the points have been Tesla-only since the first Supercharger powered up in 2014, and Superchargers have long been a key motivator for many Tesla customers.

A statement from the company said the access to fast charging “is critical for large-scale EV adoption”, and that it had always been the company’s “ambition to open the Supercharger network to Non-Tesla EVs.” The firm reassured owners that it will be “closely monitoring each site for congestion and listening to customers about their experiences.”

Get a great deal on a Tesla

Drivers wanting to use the Supercharger network should download the Tesla app to see if an accessible point is conveniently nearby. The open-access points are located across the UK, from Wokingham, Berks, to Dundee, Scotland.